BuzzFeed: "Why You Need To Stop What You’re Doing And Watch Orange Is The New Black" 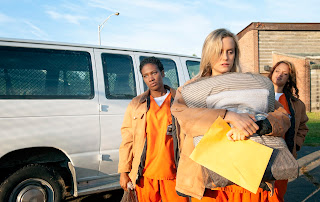 Netflix’s latest is one of the year’s best offerings on any platform. Why Jenji Kohan’s gripping prison drama makes for essential, addictive viewing.

At BuzzFeed, you can read my latest feature, "Why You Need To Stop What You’re Doing And Watch Orange Is The New Black," in which I review Netflix's latest original series, one of the year's finest television offerings.

The year’s best television series have so far emerged from some very unlikely places, whether it’s the searing Sundance Channel drama Rectify, BBC America’s upcoming gut-wrenching murder mystery Broadchurch, or Netflix’s superlative prison drama Orange Is the New Black, from Weeds creator, Jenji Kohan. (That two of these shows deal with issues of crime and punishment — and specifically imprisonment — is not surprising, given our societal preoccupations at the moment, though these weighty issues are handled extremely differently within Rectify and Orange.)

Orange Is the New Black, released by the streaming platform under its now standard pattern, which incentivizes binge watching, is the first Netflix show that truly warrants such obsessive speed viewing. The important choice you have to make is whether you want to burn through the 13-episode first season in a weekend (comedian Patton Oswalt said of the show, “Now I know how mid-70’s NYC heroin addicts felt.”) or space them out over a few weeks. But regardless of which viewing method you employ, what is certain is that you will fall under the spell of Orange fast and hard. It’s the type of television show that comes around rarely these days, one that exerts an almost gravitational pull on the viewer, so authentic and funny and poignant and tragic that it’s impossible to look away from the screen. Or, indeed, to forget about the well drawn characters — carefully and exquisitely crafted from different races and ages — that exist within the drab walls of this rundown prison environment.

The reaction to Orange Is the New Black — based on the memoir by Piper Kerman — has been intense, from among both viewers and critics. But its place of origin is not the thing that is most surprising about the show. Orange, after all, is a show that features a primarily female cast — made up of mostly unknown actors, with a few exceptions — and a protagonist in Taylor Schilling’s Piper Chapman. She is often selfish and unlikeable, but she provides an entry to a world that (I hope) few of its viewers will ever see: inside a New York women’s prison.

Prison in this case is a microcosm for the outside world, a place of tribes and alliances, of enmity and secret assignations. It is a world of extreme harshness and yet also of unexpected beauty, where a small act of kindness can seem like an enormous thing. Piper, the sort of naïve hipster who makes artisanal bath products for a living and who loves to tell anyone who will listen that her products are carried in Barney’s, is instantly out of her depth. She’s a newcomer to an incredibly rigid system that doesn’t allow for pushback and which, in an almost Victorian sense, rewards those who know their place in the machinery. That Piper — who once carried a suitcase full of drug money for her then-girlfriend, Alex Vause (Laura Prepon) — has voluntarily surrendered, choosing to relinquish her freedom, makes her initially an object of curiosity among her prison mates and of scorn.