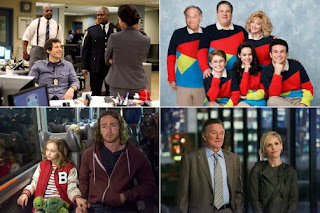 Summer TV got you in the doldrums? See what’s coming up with my and Kevin Fallon’s first impressions of 30-plus broadcast network pilots, from Resurrection and Believe to Ironside and Dads.

At The Daily Beast, you can read my last story for the site (yes, you read that correctly!), entitled, "Fall-Winter TV Preview: Snap Judgments of 2013–14’s New Shows," in which Kevin Fallon and I offer our first impressions of 40 or so broadcast network pilots coming to television next season.

Your summer vacation may have involved lounging by the pool or traveling to Europe, but we’ve spent the first few months of hot weather sorting through the broadcast-network pilots for nearly 40 new scripted shows that will likely air next season. (A caveat: the networks have been known to yank a few before they even make it on the air.) We’ve come out the other side more or less unscathed and can now offer our first takes on the dramas and comedies that are headed to the fall and midseason schedules of ABC, CBS, Fox, NBC, and the CW.

Every year the networks present their usual takes on the familiar doctor-lawyer-cop tropes, and this year is no exception. But there are also a few bright spots. Supernatural thrillers Resurrection and Believe are pretty damn engaging. Lottery-winner drama Lucky 7 is surprisingly alluring. And there are quite a few comedies—Brooklyn Nine-Nine, About a Boy, Trophy Wife, and even (surprisingly) CBS’s Mom—that actually make us want to watch another episode or 10.

So what did we think? First, a few more caveats: (1) our opinions should be considered “first impressions” of the pilots that were made available by the broadcast networks and not reviews. (2) All pilots—from music and dialogue to casting, etc.—are subject to change, so what airs next season may be drastically different from what we saw. (3) We reserve the right to change our initial opinions upon seeing final review copies of these pilots—not to mention a few more episodes. (4) Not all the fall and midseason pilots were sent out by the networks: ABC opted not to send out the pilot for its highly anticipated superhero espionage drama Agents of S.H.I.E.L.D. or those for Mind Games, Mixology, and Once Upon a Time in Wonderland; NBC didn’t send out Crossbones, Dracula, Undateable, or Chicago PD, to name four; and CBS isn’t letting us see Reckless or Friends With Better Lives just yet, while it picked up Bad Teacher to series after the upfronts. (Quite a few pilots weren’t available to press this year.)

Log line: A former All-Star softball player, smarting from a recent divorce, moves back in with her curmudgeonly dad and her young son and ends up coaching her son’s misfit Little League team.

Jace Lacob: While watching this, I kept thinking to myself that the grumpy, trigger-happy dad should be played by James Caan. What’s that, you say? The dad IS played by James Caan? Oh. It seems that even Caan tries too hard to play a blue-collar James Caan type called the Cannon, and the results are creaky and stiff. The boozy British mother, played by Lenora Crichlow (Being Human)—and her dynamic with Maggie Lawson’s Terry—is a rare highlight in this otherwise drab, lackluster comedy pilot, in which nearly every single joke fails to connect with the bat.

Kevin Fallon: There are elements here that should work. James Caan should be able to play a curmudgeonly drunk grandpa in his sleep and still get laughs. Writers Mark and Robb Cullen aren’t afraid to tread into slightly politically incorrect and sometimes even weird humor. (A friendship builds between Maggie Lawson’s Terry and another school mom that’s delightfully odd and crass.) Each member of the Bad News Bears of a team Terry ends up coaching has what should be a chuckle-worthy quirk. Yet in spite of all this, nearly every joke grounds out. With few laughs to reward an otherwise talented cast, the series is ultimately a swing and a miss.