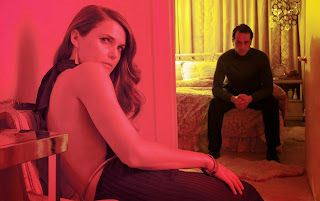 Yes, returning shows like Breaking Bad, Mad Men, The Good Wife, Borgen, Parenthood, and others were aces this year. But this is all about the newcomers.

At BuzzFeed, you can read my latest feature, "The 16 Best New Television Shows Of 2013," in which I offer up my picks for the best new shows of the year, including Rectify, Orange Is the New Black, The Returned, Masters of Sex, Broadchurch, and Orphan Black, to name a few.

The story of Norman Bates — recounted in Alfred Hitchcock’s jangling Psycho — is only too familiar to most people. But under the watchful eye of executive producers Kerry Ehrin and Carlton Cuse, the Twin Peaks-esque Bates Motel offers a fresh look at Norman’s formative years (despite the fact that the series is set in the present day and in a different location), including his relationship with his overbearing, quixotic mother, Norma (a stellar Vera Farmiga) after they purchase a run-down motel on the Oregon coastline and discover that their new sleepy town holds all manner of deadly secrets. As Norman and Norma, Freddie Highmore and Farmiga are riveting to watch, their damaged psyches threatening to erupt into violence at any moment. The result is an eerie and off-kilter drama about the things that bind us.

This three-episode British import — about a quartet of women who worked as codebreakers at Bletchley Park during World War II and reunite years later in order to entrap a serial killer when his pattern emerges — was a taut, thrilling chase as well as a nuanced portrait of the changing role of women in the 1950s, as each of the ladies struggles with a life of mundanity after playing such a pivotal role in the war. No surprise that another go-around is on tap for the amateur sleuths; The Bletchley Circle was downright gripping.