BuzzFeed: "How Scandal Turned Into An Exploration Of Free Will" 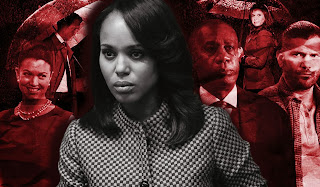 Season 3 of Shonda Rhimes’ additive ABC drama offers not only a pulse-pounding thrill ride each week, but also a canny exploration of self-determination. Spoilers ahead, if you’re not caught up.

At BuzzFeed, you can read my latest feature, "How Scandal Turned Into An Exploration Of Free Will," in which I take a look at the third season of Shonda Rhimes' addictive ABC thriller.

Scandal’s seven-episode first season, which aired in early 2012, gave very little indication of just where this riveting drama would go by its third and current season. At first glance, it appeared to be a legal drama centering on Olivia Pope (Kerry Washington) and her team of misfit lawyers, a group of very damaged people lured into the arena by Olivia’s gritty strength and forged into self-made gladiators. Their elite crisis management firm operated in Washington, meaning that the show’s title came into play fairly quickly via a slew of high-profile cases.

Olivia had ties to the fictional Grant Administration, and in particular to the POTUS, Fitz (Tony Goldwyn), for whom Olivia had worked and with whom she’s been having an extra-marital affair. Oval Office intrigue, horrific murders, and tales of jaw-dropping corruption soon followed as Scandal quickly became the sort of show that in years prior would have been referred to as a “watercooler drama,” a series that exerts a gravitational pull on the viewer so strong that they need to dissect every moment with their co-workers the following day. But thanks to the prevalence of social media in 2013, the Shonda Rhimes-created Scandal became that show for a new generation of obsessive viewers who took to Twitter and Facebook instantly to analyze the latest twist in television’s most serpentine drama.

Season 3 of Scandal, which wraps up the first half of its run on Dec. 12, has amped up the stakes in a show that already required Dramamine for those who found the rollercoaster plots moving at too high a velocity. While prying into the marriage between Fitz and his Lady MacBeth-esque First Lady, Mellie (Bellamy Young), and the complex dynamics between Fitz and Olivia, the show had wisely avoided giving away too much of Olivia’s tragic backstory. She was, after all, a gladiator. Donned in her white hat — sometimes quite literally — she stormed into the ring and took no prisoners. Olivia Pope was a blood-soaked warrior, unafraid of getting her hands dirty. But, ultimately, she was just as damaged as those she saved. In exploring her complicated backstory, Scandal has once again revealed new facets of Olivia’s character, one that refuses to be pigeonholed in the category of Strong Black Woman. Her father, Eli Pope (Joe Morton), oversees B613, a deadly black ops division of the nation’s intelligence forces whose very ruthlessness has smashed up the psyches of several characters, including Huck (Guillermo Díaz), Jake (Scott Foley), Quinn (Katie Lowes), and even Fitz himself. While on a covert operation for the Navy, the future POTUS was given an order by “Command” to shoot down an American passenger jet carrying 300-plus people aboard, including, it was believed for a while, Olivia’s own mother.