BuzzFeed: "Sherlock Is Back From The Dead And Better Than Ever" 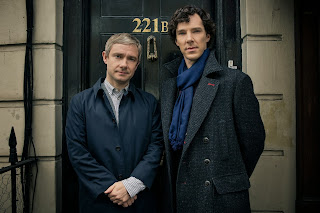 The hotly anticipated British mystery drama returns with the revelation of just how Sherlock Holmes faked his death two years ago. Warning: Minor spoilers ahead!

At BuzzFeed, you can read my latest feature, "Sherlock Is Back From The Dead And Better Than Ever," in which I review the spectacular third season opener of Sherlock ("The Empty Hearse"), which airs Jan. 1 in the U.K. and on Jan. 19 on PBS' Masterpiece.

Just how did Sherlock Holmes (Benedict Cumberbatch) fake his own death?

When Sherlock picks up — two years after the action of the 2012 Season 2 finale, “The Reichenbach Fall” — the facts surrounding how the master sleuth pulled off the seemingly impossible are kept firmly under wraps for much of the ingenious 90-minute season opener, “The Empty Hearse” (which airs Jan. 1 on BBC One in the U.K. and on Jan. 19 on PBS’s Masterpiece).

This is not to say that viewers are denied a revelatory sequence in which the truth about just how Sherlock faked his own death is laid out. The taut sequence that reveals how he achieved such a feat is both simple, yet cunningly complex (not to mention quite spectacular), though I won’t spoil the outcome for anything on this Earth. However, the episode’s writer Mark Gatiss (who once again pulls double duty as Sherlock’s glacially cold brother Mycroft) rather smartly withholds the reveal until “The Empty Hearse” is almost concluded, creating an ongoing mystery that continues to swirl around the minds of both the viewers and several characters within Sherlock itself.

And throughout “The Empty Hearse,” those characters fantasize about just how Sherlock may have pulled off the stunt of faking his death, though the fantasies they depict often say more about the characters themselves than they do about the great detective. Forensic tech Anderson (Jonathan Aris) sees Sherlock as a swashbuckling daredevil, crashing through windows and planting kisses on co-conspirator Molly Hooper (Louise Brealey), a fantasy that sets up Holmes as someone inherently larger than life. (Which makes sense given the obsessive Carrie Mathison-style wall of clues he’s created in his flat.) Another character sees the entire exploit as a romantic bluff by Sherlock and Moriarty (Andrew Scott), a fantasy that plays to a very particular subset of Sherlock slash fiction.