BuzzFeed: "Where Can Homeland Go From Here?" 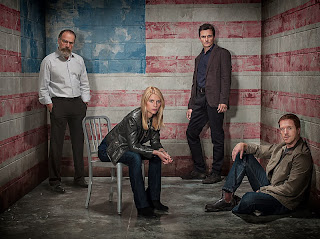 Showtime’s espionage thriller wrapped up its third season and much of its overall narrative. So where can the show possibly go in Season 4? WARNING: SPOILERS AHEAD.

At BuzzFeed, you can read my latest feature, "Where Can Homeland Go From Here?" in which I look at the third season finale of Showtime's Homeland and where the show could possibly go from here. (Answer: wherever it does, I likely won't be watching as I'm fatigued with this show at this point.)

With Sunday’s season finale of Homeland (“The Star”), Showtime’s espionage thriller seemed to fold inwards upon itself, offering up a 20-minute epilogue that felt very much like a conclusion for the series, an alternately intelligent and deeply frustrating drama, depending where in its overall narrative you were at any given time. (It was, however, renewed for a fourth season earlier this year.)

In its often maddening and meandering third season, Homeland found Carrie (Claire Danes) pretending to be on the outs with the CIA while actually on a covert operation under the watchful eye of an even-more-gruff-than-usual Saul (Mandy Patinkin). Saul, meanwhile, hatched a truly mind-boggling plot to insert a high-level asset in the Iranian government… and get Brody (Damian Lewis) — himself the subject of an international manhunt for a bombing at the CIA that killed 100-plus people — to assassinate a high-ranking Iranian official in order to put the rogue nation under U.S. control.

“The Star” managed to tie up many of the narrative’s loose ends and capped off the Carrie/Brody dynamic, offering up a season finale that may have worked more effectively as a series finale. (Seriously, stop reading right now if you haven’t yet watched “The Star.” SPOILERS!) Brody’s death — ordered by Javadi (Shaun Toub) in an effort to secure his role in this power play — is meant to be a pyrrhic victory; it’s meant to be a gut-wrenching ordeal both for Carrie — who is carrying his baby — and for the audience at large. And there is a brief moment, when Brody is raised on a crane by his neck at a public execution and he stares outwards with terror in his eyes, where his death has some actual emotional weight and consequence. And then Carrie climbs the fence and shouts his name and I remember I’m watching Homeland, which ultimately stumbles into some melodramatic excess every five minutes or so.