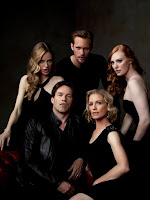 True Blood withdrawal getting you down? Fret not, fangbangers.

Over at The Daily Beast, you can read my latest feature, entitled "Inside True Blood's Fourth Season," in which I sit down with executive producer/showrunner Alan Ball about the fourth season of the HBO vampire drama at his Hollywood office to get some details on what's to come this season.

If that weren't enough True Blood-related deliciousness for you, you can also check out "Nine Things to Know About Season 4 of True Blood," in which Ball teases what's to come for Sookie, Eric, Pam, Tara, Jessica and Hoyt, the faeries, the witches, and more. And there might be a hint or two about what's to come in Season Five as well...