The Daily Beast: "The Cult of Linda Hunt" 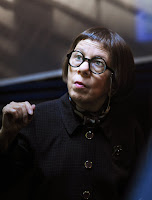 At 66 and four-feet-nine, Linda Hunt is an unlikely action heroine.

But as the enigmatic Hetty Lange on NCIS: LA, Oscar winner Hunt (who won for her staggering performance as a male Indonesian-Australian dwarf in Peter Weir's The Year of Living Dangerously) has become a Teen Choice Award recipient and the show’s breakout character.

Over at The Daily Beast, you can read my latest feature, entitled "The Cult of Linda Hunt," in which I sit down with the Oscar (and Teen Choice Award!) winner Hunt to discuss NCIS: Los Angeles' Hetty, The Year of Living Dangerously, water from the moon, and what the future holds. (I also talk to creator Shane Brennan and Chris O'Donnell about the remarkable Hunt and her character.)