The Winds of War: An Advance Review of Downton Abbey Season Two 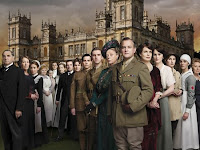 It's no secret that I'm a devotee of lavish British costume drama Downton Abbey, which recently wrapped its second season run on ITV in the U.K. and which finally heads across the pond this weekend, where it will again air as part of PBS' Masterpiece Classic skein.

In the last year or so since we last saw the Crawleys, viewers from all walks of life have discovered the irresistible joys of the sublime Downton Abbey, reveling in the spirit of unpredictability and historical detail that Julian Fellowes' creation has in abundance, as well as memorable characters, a winning blend of pathos and humor, plot twists, and star-crossed romances. Not since Upstairs, Downstairs has a period drama seemed quite so tangible and relevant, at once timeless and thoroughly modern at the same time.

Season Two of Downton Abbey is set two years after the end of the first season, as Britain--and Europe as a whole--is enmeshed in the First World War. On the winds of war, change has come to the stately house, and neither master nor servant has emerged unscathed as members of every class must adapt to their circumstances, which become greatly altered as the season wears on. (For more on what specific characters are up to in the second season, you can read this Daily Beast feature that I wrote in August, in which the actors and Fellowes tell me what Matthew, Mary, and the others are up to in Season Two.)

Just as the first season found Downton invaded by technology and new ideas as the Edwardian period came to an end, this condition-of-England story finds the war literally entering the halls of Downton as the house becomes a convalescent hospital for wounded officers and the Crawleys adapt once more to the tumult of transformation. Whether they bend or break under the strain is one of the major subplots of this second season, which revisits several major storylines from the first season--the doomed romance between heir Matthew Crawley (Dan Stevens) and Lady Mary (Michelle Dockery), the possibility of happiness between valet Bates (Brendan Coyle) and housemaid Anna (Joanne Froggatt), the machinations of Thomas (Rob James-Collier) and Miss O'Brien (Siobhan Finneran), the tension between Lady Sybil (Jessica Brown Findlay) and chauffeur Branson (Allen Leech), and the secret that Mary harbors, to name but a few--while introducing several new characters and new plotlines.

Tonally, this new season is vastly different than the one that came before. While we're given a few moments of domestic mirth that harken back to the early days of the first season, this is most definitely a war epic, with scenes of horror in the trenches of the Somme contrasting sharply with the dining room banter between Dowager Countess Violet (Maggie Smith) and her clan. There's a seriousness and darkness which permeate the second season. Pivotal matters--the whereabouts of a missing snuff box, for example--from the first season now seem woefully trivial in the face of war, death, and a lost generation. Which means that the stakes are now far higher for the Crawleys and their servants in Season Two of Downton Abbey, where the things that go missing are far less replaceable.

I've had the opportunity to see the entire British run of Season Two and the PBS version, which makes some (very) minor cuts in order to fit them into their allotted timeslot and which combines the first and second episodes and the seventh and eighth into two two-hour installments. (There are, as with Season One, no missing episodes, no matter what the British press might insinuate and I don't believe that any of the verbal grenades, tossed off so magnificently by Smith, are eliminated.) There is also the matter of the Christmas Special (so-called because it aired on Christmas Day in the U.K.), which will air here as the final episode of the season. (Fans foolish enough to illegally download the "Christmas Special" will be in for a rude awakening: it's set after the events of Season Two.)

After watching all of Season Two of Downton in the fall, I was lucky enough to watch that gorgeous final episode on Christmas Day, and I can easily say that it's the best installment of the entire season, a gripping and triumphant episode that not only ties together the plot threads of the second go-around but also tantalizingly sets up the direction for the third season and pays off some of the somewhat meandering plots from this one.

Which brings me to some of the issues I had with Season Two. I'll preface this by saying that Downton Abbey is a full head and tails above the rest in every respect, even when it (momentarily) falters, and that I love this show dearly, with an obsessive zeal that means that I'm watching with laser-like intensity. With regard to Season Two, there is a sense of soapy repetitiveness to some of the storylines that can, at times, bring the pacing to a screeching halt. Kitchen maid Daisy (Sophie McShera) gets saddled with a storyline that feels as though she's doing the same verbal two-step for six episodes straight. Likewise, the romance between Bates and Anna--one of the best elements of the first season--feels almost maudlin when every time they express how happy they're about to be, their dreams get dashed on the cobblestones. The effect feels rather like the start-stop-start-stop of a stalling engine, with neither storyline able to get out of neutral and move forward with any sense of momentum.

However, both storylines are serviced better in the finale/Christmas Special than they were throughout Season Two, with that episode providing closure--in both a narrative and emotional sense--to both story arcs. I don't want to spoil any major plots here (the series is far too good to come to it knowing everything that's going to happen), but I will say that the final episode resolves both in a promising and intriguing way that's truthful to the characters and their situations. It also removes the faint whiff of character assassination that's coming off of Robert (Hugh Bonneville) after the last third of episodes. Again, I don't want to give things away but I was puzzled as to why Fellowes would chose to go this route, just as I was unsure as to why the self-righteous Isobel (Penelope Wilton) had been transformed into such a shrill harpie in the second season and the entire point of a potentially historically-accurate but painful fraught episode that revolves around the letter "P," and Lady Edith (Laura Carmichael).

Which isn't to say that I disliked the second season, because I certainly didn't, but after the dizzying heights of Downton's precise and perfect first season, the second season does suffer slightly in comparison. However, these are minor quibbles in a season that's also filled with some superlative performances, particularly from Stevens, Dockery, Bonneville, and others. The new characters, including Zoe Boyle's Lavinia Swire and Iain Glenn's Sir Richard Carlisle, fit into Downton Abbey beautifully, providing a new sense of heightened tensions within the drawing rooms and broken hearts of the Crawleys. Both provide the latest obstacles to the potential union between Mary and Matthew that the series has been hinting at since its very first installment and Boyle in particular is to be praised for making Lavinia wholly sympathetic and almost saintly in many ways. Many shows would have gone the route of making Lavinia easy to hate, but Fellowes and Boyle imbue Lavinia with a refreshing innocence and steadfast devotion that makes her quite easy to love.

And that's what we're left with in the face of war: how love unites us and keeps us going, even in the most difficult of times. But it's not always romantic love that keeps the home fires burning; it's also love of one's job and pride in one's work (I'm thinking of Jim Carter's devoted butler Carson here) and familial love, as well as love of a particular place, even when it seems as though things are changing forever. With Season Two of Downton Abbey we're invited to see the resilience of the human spirit and heart amid troubled times. But hope, as they say, springs eternal as well. And within Downton Abbey, the future--or the past--has never looked better.

Debbie said…
I loved the two hour premiere of S2for Downton Abbey. Just as raw, beautiful, breathtaking, and treacherous as the first season with a new set of snakes (Lavinia, Vera Bates), new developments (a nurse in the Crawley family), a new family harlot who drives, and a new rich man for Mary to go on and on about while pining for Michael. Can't wait to see more!
1/10/2012