The Daily Beast: "Game of Thrones and Mad Men Characters Fight to the Death" 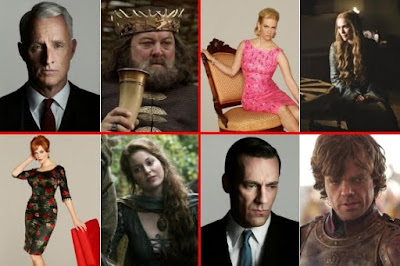 Over at The Daily Beast, you can read my latest feature, "Game of Thrones and Mad Men Characters Fight to the Death," in which I imagine 10 tongue-in-cheek battles between the characters of AMC’s Mad Men and their Game of Thrones counterparts on HBO.

With the return of AMC’s Mad Men and HBO's Game of Thrones, Sunday evenings have become a tug of war, with the two critical darlings exerting an irresistible pull on the faithful.

It’s hard to escape certain similarities between the two shows: both take place in distant times (OK, Game of Thrones, based on George R.R. Martin’s A Song of Ice and Fire novels, is set in another world altogether), both delve into racial and religious issues this season, and both feature heavy drinking, illicit relationships, and completely inappropriate workplace behavior in worlds that celebrate ambition, cruelty, and Machiavellian power grabs.

Which raises an imaginary question: what if the ad men and women of Mad Men were forced to fight to death with their counterparts in the Seven Kingdoms of Westeros? Would Don Draper (Jon Hamm) take down Tyrion Lannister (Peter Dinklage)? Just how are Bert Cooper (Robert Morse) and Varys (Conleth Hill) alike? And who is more of a sociopathic boy-king: Joffrey Lannister (Jack Gleeson) or Pete Campbell (Vincent Kartheiser)? In the game of thrones, you either play or die…or you just black out from drinking too much.