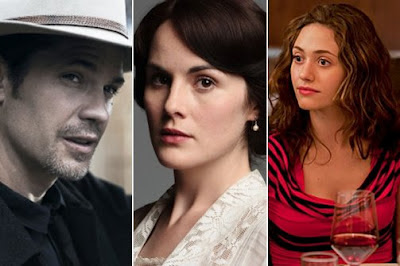 The nominations are out: Homeland, Downtown Abbey, and Girls get their shot at the awards, while The Good Wife, Community, Louie, Justified, and many others are shut out.

Over at The Daily Beast, you can read my latest feature, "2012 Emmy Nomination Snubs & Surprises," in which I discuss which shows and actors were snubbed by the TV Academy as well as a few surprise nominations. Plus, view our gallery of the nominees.

The Television Academy has today announced its nominations for the 64th Primetime Emmy Awards and, looking at the list, you may be forgiven for thinking that every single member of the casts of Downton Abbey and Modern Family had walked away with nominations. (It just seems that way.)


AMC’s Mad Men and FX’s American Horror Story tied for the most nominations, with 17 apiece, while PBS’ cultural phenomenon Downton Abbey—which shifted from the miniseries category into Best Drama this year—grabbed 16 nominations (tying with History’s Hatfields & McCoys), including many in the acting categories. Also getting a lot of love this year: Game of Thrones, Homeland, Modern Family, and Sherlock. Not getting a lot of love: network dramas.

Once again, the dramatic categories are fierce competitions, including the dramatic actress races, which boast Julianna Margulies, Michelle Dockery, Elisabeth Moss, Kathy Bates, Claire Danes, and Glenn Close for Lead Actress and Archie Panjabi, Anna Gunn, Maggie Smith, Joanne Froggatt, Christina Hendricks, and Christine Baranski for Supporting. But for those shows that managed to score a bounty of nominations, there were those that were shut out in the cold altogether.

Hugh Laurie, an Emmy mainstay, failed to get a nomination for the final season of Fox’s House, while Justified didn’t get any love as a show or for its stars, Timothy Olyphant and Walton Goggins. (The show scored only two nominations overall, none in the main categories.) With Downton Abbey in the best drama series mix, CBS’ The Good Wife didn’t score a nomination, and the comedy list, heavy on HBO contenders, failed to include Community, Louie, and Parks and Recreation. (Speaking of which, will Parks’ Nick Offerman EVER get a nomination at this rate?)

Some oversights, however, are more egregious than others, and the nominations this year had their fair share of surprises as well. Here are some of the biggest snubs and most shocking surprises of this year’s Emmy nominations…

SNUB: Parks and Recreation (NBC)
This year’s Best Comedy category boasts no less than three HBO shows—including two newcomers in Girls and Veep, and returnee Curb Your Enthusiasm—leaving little room for much else to break through. The rest of the positions went to 30 Rock, Modern Family, and The Big Bang Theory, all of which have proven over the years to be irresistible catnip to Emmy voters. But to leave out Parks and Recreation, which had one of its best and most nuanced seasons to date, is particularly myopic. Revolving around the campaign of Leslie Knope (Amy Poehler, who was rightly nominated), Season 4 was tremendous, examining the hope and optimism of one political candidate against whom the odds were stacked, thanks to a spoiled candy company offspring (Paul Rudd) and his manipulative campaign manager (the ubiquitous Kathryn Hahn). Omitting Parks from the list of nominees is a slap in the face given just how deserving this show is of some awards recognition.

SNUB: Community (NBC)
Likewise, the final Dan Harmon season of Community was also shut out of the awards process. Putting aside the fact that none (NONE!) of its commendable actors managed to secure nominations in their respective categories, the gonzo and wildly imaginative comedy was also denied a Best Comedy nomination, despite the fact that this season proved to be one of its most absurd and inventive yet, delving into chaos theory, the mystery of a murdered yam (presented as a Law & Order episode), a Civil War parody, 8-bit video games, and a scathing Glee takedown. Perhaps Community is simply too good for the Emmys; perhaps it belongs not to awards committees, but rather to the people instead: to those individuals who appreciate and understand the warped genius of this show.