The Daily Beast: "Zero Hour: Is This the Dumbest Show Ever to Air on TV?" 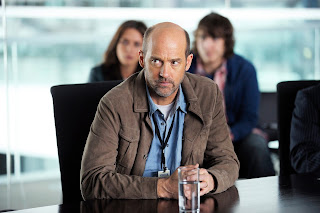 ABC tries to get back in the Lost game with the ridiculous Zero Hour. My take on the show, launching Thursday, that just might be the dumbest ever on television.

Over at The Daily Beast, you can read my review of the first episode of ABC's overhyped adventure drama "Zero Hour" (entitled ""Zero Hour: Is This the Dumbest Show Ever to Air on TV?"), in which I call the Anthony Edwards-led drama "nothing more than stale schlock, an hour full of zeroes.

Ever since Lost went off the air—and, actually, before—the broadcast networks have desperately searched for a show that could tempt viewers eager to get, well, lost in the complexity, mythology, and mystery of the Damon Lindelof/Carlton Cuse drama.

Zero Hour is not that show.

The ABC drama, which begins Thursday night at 10 p.m., recalls fiascos like FlashForward more than Lost. Created by former Prison Break writer Paul Scheuring, Zero Hour is no valentine to television, offering up a ludicrous mash-up of overtly familiar tropes: doomsday devices, the birth of the Anti-Christ, secret societies, and a witch’s cauldron of yawn-inducing fare. Did I mention that there are also goose-stepping Nazis, clocks embedded with treasure maps, demon spawn, and enough nonsense to make The Da Vinci Code seem downright plausible?

The plot—and I use that term lightly—revolves around Hank (Anthony Edwards), the shlubby editor of a paranormal magazine (called Modern Skeptic, no less) whose wife, clock seller Laila (Jacinda Barrett), is kidnapped by a ruthless assassin on the FBI’s most wanted list as part of a conspiracy that involves the end of the world.

There’s also the appearance of 12 mystical clocks, constructed during the rise of the Nazis in Germany, and the Rosicrucians, a secret Catholic mystical sect said to be guarding some sort of device with the power to bring about “zero hour” for the planet. Hank sets out on a world-spanning mission (funded by whom?), heading for the Artic circle after discovering a diamond whose flaw is actually a map to something called “New Bartholomew” in an effort to find Laila and the man who took her.