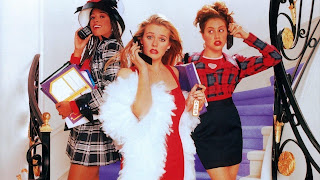 When Amy Heckerling set out to make a modern day retelling of Jane Austen’s Emma, few imagined that the director would create a new classic and one of the most quoted films ever. The Alicia Silverstone comedy turns 18 years old today, but, let’s be honest, Clueless is timeless.

At BuzzFeed, you can read my first feature for the site, "Clueless Comes of Age," in which I write about Clueless turning 18 years old today, which is horrifying on so many levels.

Amy Heckerling’s Clueless, inspired by the winking spirit of Jane Austen’s 1815 novel Emma, was released in theaters 18 years ago today, which means that it has officially reached adulthood. For a movie about the vapidity of adolescence, the fact that nearly two decades have come and gone since Clueless first hit theaters cuts through me like a knife.

I was nearly 18 years old when the Alicia Silverstone film came out, and I saw it on opening weekend, a hot July night in 1995, the summer before I went to college. I don’t think anyone anticipated that the film would become a sleeper hit (it grossed $11 million on its opening weekend, way ahead of estimates), nor that it would go on to spawn a lexicon of its own — with its “Barneys” and “Bettys,” the use of “As if!” as a viable rejoinder to any argument — but for those of us who discovered the film in those days, it was like a bright light was being shined directly into the inner chambers of our hearts.

Clueless, first and foremost, was smart. It may have traded Regency-era England for 1990s Beverly Hills, but it managed to retain the spark of both Austen’s titular heroine and the flintiness of the novel’s romantic comedy plot, which presents naïve Emma Woodhouse as a self-made Cupid who is, in actuality, a selfish meddler who needs to learn what love really is, even as she plays at making couples out of those around her. A few broken hearts and a sudden realization — that she loves her romantic sparring partner, Mr. Knightley — later, and Emma is both humbled and bowled over by love. She is transformed by the experience, and her romantic adventure mirrors her psychological development. Emma moves into adulthood, and so too does Austen’s “gentle reader” in a way.