BuzzFeed: "This Breaking Bad Alternate Ending Must Be Seen To Be Believed" 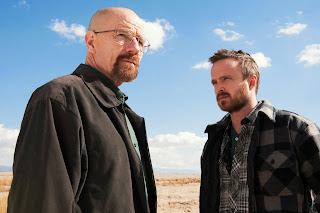 Was it all just a terrible nightmare? Malcolm in the Middle’s Hal may have eaten too many fried Twinkies before bed, according to a new DVD extra. [UPDATED]

At BuzzFeed, you can check out my latest post, "This Breaking Bad Alternate Ending Must Be Seen To Be Believed," in which I take a look at an alternate ending for AMC's Breaking Bad, one that invokes Newhart and, well, Malcolm in the Middle.

Fans of AMC’s Breaking Bad continue to mourn the death of the antihero drama in their own unique ways, but thanks to this DVD extra — from the Breaking Bad: The Complete Series DVD box set, out November 26 — fans of the science-wielding antihero have yet another chance to imagine a different fate for Bryan Cranston’s Walter White.

In this case, an alternate ending to the show itself, which — heavily borrowing from the iconic ending of Newhart (which referenced the earlier The Bob Newhart Show) — imagines that the entire narrative of Breaking Bad was a dream experienced by Cranston’s pater familias Hal from the 2000-2006 Fox comedy Malcolm in the Middle, substituting fried Twinkies for Bob’s Japanese food. Waking up terrified from his nightmare, Cranston’s Hal remarks that he was “this meth dealer,” before being comforted by his wife, Lois (Jane Kaczmarek), who reminds him that he can’t cook anything, let alone meth, and that he’s definitely not married to a “tall, beautiful blonde” woman.