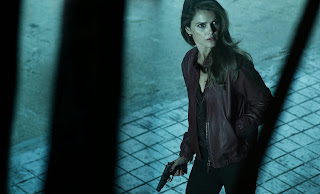 After Sochi, the wolf, the bitter protests, and human rights violations, the second season of the FX Cold War drama arrives at the perfect time to look back at failed Soviet ambitions. Minor spoilers ahead.

At BuzzFeed, you can read my latest feature, "The Americans Season 2 Arrives Just As U.S.–Russian Relations Turn Icy," in which I review the second season of FX's The Americans.

With the closing of the Sochi Olympics earlier this week, Russia is on our collective minds once more: FX has rather cannily picked the perfect time to launch the second season of its gripping Cold War drama The Americans, which revolves around a set of married Soviet sleeper agents, Elizabeth (Keri Russell) and Philip Jennings (Matthew Rhys), in suburban 1980s Washington, D.C.

Yes, The Americans has car chases and street brawls, silly wigs and costume changes (not to mention one scene in particular that pushes the boundaries of basic cable depictions of sexuality), but these elements are window dressing for what lies at the true heart of the series: an exploration of national and personal identity. While the show might depict the high-stakes Cold War skirmishes and battles between the U.S. and the Soviet Union, there is a canny investigation of ideology, loyalty, and self-identity unfolding within these characters, even as the collateral damage they create in their wake mounts.

The risky missions and the tradecraft that the Jenningses embrace — dead drops, legends, and sleeper cell mentalities — become emblematic for thwarted Soviet ambition. Until the Sochi Olympics, this intracountry strife and its secret wars seemed so far removed from our daily life, but The Americans arrives at a time when Russia is once more at the forefront of the news cycle. The futility of these spies’ operations is a tacit reminder of the fluidity of the international stage and the shortness of memory of its participants.

In the show’s first season, the audience quickly learned the stakes for the Jenningses. They live on a seemingly placid street across from Stan Beeman (Noah Emmerich), who, coincidentally, is the FBI agent tasked with tracking down undercover KBG officers. And the duo is also in constant fear both of being unmasked and of having their children — Paige (Holly Taylor) and Henry (Keidrich Sellati), who initially have no idea what their parents are doing — taken from them.