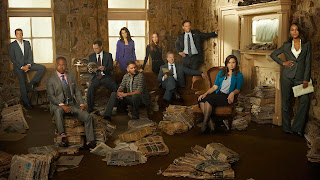 Shonda Rhimes’ political thriller always leaves you guessing, but entertainment editorial director Jace Lacob and staff writer Emily Orley take a stab as to what might happen by the end of the third season. Let the wild speculation begin!

At BuzzFeed, you can read my latest feature, "53 Possible Ways Season 3 Of Scandal Could End," in which Emily Orley and I come up with, yes, 53 ways that this season of Scandal could end, from the possible to the highly absurd.

1. Maya’s bomb explodes on the campaign trail, leaving the fates of several characters — including Fitz — unclear as the show goes on its summer hiatus. CLIFF-HANGER!

2. Fitz is killed when the bomb goes off, widowing Mellie in the process. Olivia is understandably distraught, as her actions lead to Maya being able to plant the bomb.

3. Fitz is killed when the bomb goes off and Cyrus runs in his spot on the Republican ticket. He becomes the first openly gay man to win the presidency.

4. Adnan turns on Maya and traps her in a room with the bomb. Adnan becomes a member of Olivia Pope & Associates and Harrison’s girlfriend.

5. Andrew nobly saves Fitz from death, but is himself killed in the process. This gives Mellie even more reason to hate her husband and to feel like he has “taken everything” from her.

6. Fitz is killed when the bomb goes off. Because Sally is the sitting vice president, she ascends to the Oval Office as Fitz’s successor. Olivia is distraught and vows to get Sally kicked out of office.

7. Realizing that she failed to stop Maya when she had the chance, Quinn sacrifices herself to stop Maya’s plot and is killed in the process. Charlie kills Maya in an act of vengeance and ends up joining Olivia Pope & Associates.

8. Maya plants a bomb in the White House. Fitz, Andrew, and Mellie are taken to the secret bunker in the basement, but since Olivia already used her clearance to get down there once, she is left upstairs and thrown against the wall in the bomb blast. Everything goes black.

9. Charlie dies saving Quinn from the blast. Quinn rejoins OPA, though her passion for Olivia’s mission has been tempered from her time with B613 and with Charlie. She wants nothing to do with Huck.

10. Quinn attempts to sacrifice herself in order to stop Maya’s plot, but Huck saves her at the last moment.

11. Feeling betrayed, Charlie attempts to kill Quinn when he realizes that she has been plotting against him and B613. She is saved by Huck.

12. Charlie attempts to kill Huck, believing him responsible for Quinn’s loyalty issues. Quinn kills Charlie in order to save Huck.