BuzzFeed: "The Whole Of Orange Is the New Black Season 2 Is Greater Than The Sum Of Its Parts" 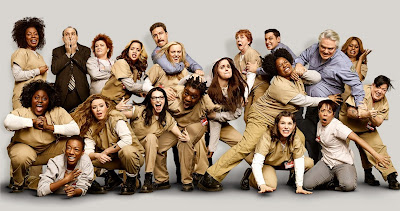 After a sterling first season, expectations were high for the sophomore season of Jenji Kohan’s female prison drama. Fortunately, Season 2 proved to be just as juicy, sweet, and tart as you’d want it to be. (MAJOR SPOILERS ahead.)

Orange Is the New Black’s stunning second season manages to be ambitiously large and somehow intimate. It’s the equivalent of a pointillist painting: from up close each dash and dot has its own individual identity and meaning, but when viewed at a distance, they coalesce into something altogether different and dependent on its parts.

In its deeply complex and magnificent sophomore year, Jenji Kohan’s Orange Is the New Black offers a scathing indictment of a broken system, using Litchfield Penitentiary as a stand-in for the failings of society as a whole. As the season progresses and conditions at Litchfield become worse and worse — because of venal officials, embezzlement schemes, force majeure, and general lack of empathy or interest — it becomes clear that these inmates have permanently slipped through the cracks as the most basic requirements of the prison system (keeping these women “safe and clean”) are not even being met. (The bubbling up of sewage from the toilets becomes an emblem of the corruption and rot at work here.)

The freedom of choice within the non-Litchfield lives of the corrections officers — even Fig (Alysia Reiner), the mercenary assistant warden, gets some deeper shading this season as her life implodes —appears to be wholly at odds with that of the women they’re sworn to protect. Healey (Michael J. Harney), who’s in a miserable marriage to a Russian mail-order bride, enters therapy to deal with his anger issues and creates a “Safe Place” for the inmates to open up as a way of compensating, perhaps, for his ineffectualness. Joe Caputo (Nick Sandow), the masturbatory administrator, becomes a hero of sorts over the course of the season until he too is seduced by power, opting not to do the right thing or even listen to it, such as when Matt McGorry’s Bennett confesses that he got inmate Daya (Dascha Polanco) pregnant. The truth becomes an inconvenience, something to be shrugged off and compartmentalized. It’s far easier, then, just to put a Band-Aid on matters, to drag out a nun (Beth Fowler’s Sister Jane Ingalls) to make a pre-scripted statement. Caputo sees himself as a savior of these women, but he chooses ultimately to perpetuate the broken system that surrounds them. The prison officials are, in actuality, also just as trapped — by red tape, by bureaucracy, by personal desire, by anger issues — as the inmates.