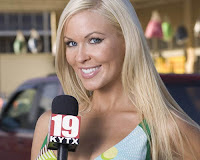 Ouch. It's got to sting like hell when a network yanks your series off the air after only one airing. Even more so when that cancellation occurs, not during the regular TV season, but during the typically viewer-light zone of late August.

However, that's just what happened to FOX's hybrid comedy Anchorwoman less than a day after the disastrous series premiere. FOX has confirmed that it has canceled the series, a docusoap/semi-scripted comedy in which former WWE diva (or something like that) Lauren Jones moves to a small Texas town to take over as an untrained anchorwoman on the evening news of a local station.

There aren't too many failed series that can claim credit to actually receiving cancelation notices less than 24 hours after their launches, putting Anchorwoman in a select club also populated by ABC's recent comedy fiasco Emily's Reasons Why Not, from last season.

So what's filling in for the Lauren Jones-led comedy on Wednesday nights at 8 pm? Back-to-back repeats of fellow FOX laugher 'Til Death, of course. And, yes, Anchorwoman did perform just that dismally (1.0/3 share in A18-49) that FOX would rather air repeats of that tepid comedy than to continue to air Anchorwoman.

For fans of the series (um, there must be at least one or two of you out there), FOX will air the remaining four installments of Anchorwoman on fox.com.

On tonight's episode ("Human Nature"), it's the first part of a two-part storyline in which the Doctor is forced to assume the identity of John Smith, a human schoolteacher, in order to conceal himself from some nasty aliens in 1913 England. But will the Doctor go too far in his disguise? Find out tonight.

Anonymous said…
Good riddance. I shouldn't be surprised that Fox put this garbage on the air in the first place and during the summer but they seriously need to realize that this stuff is not what people want to see. Hopefully Kevin Reilly's influence will start kicking in soon.
8/24/2007

Danielle C.F. Maris said…
Your title for this post is more funny and original than the show was.
8/24/2007

yatesy said…
Human Nature was a "New Adventure" Doctor Who book written by Paul Cornell (who probably wrote the episode). It has to be, IMHO, one of the very best Who books written in the history of the show (and there's a ton of them) but the book actually was the 7th Doc (Sylv McCoy). Paul has a way with getting into the psyche of the Doc, and I am really interested in how he adapts this to the small screen (and this new Doc). In the meantime, pick up the book, its amazing.
8/25/2007

Anonymous said…
Sick, wrong, and just plain stupid. I am glad Fox came to their senses for once and realized that Mike Darnell can't be right all the time.