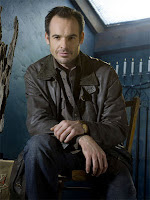 Despite seeing petitions at Comic-Con last weekend attempting to resurrect the wizard private investigator drama, The Dresden Files is no more.

The final nail in the coffin? Series lead Paul Blackthorne, who played the aforementioned Harry Dresden, an ex-communicated wizard who opens a private detective agency in Chicago, has signed on to a new series.

Blackthorne will join the cast of ABC's new drama Big Shots next season as a recurring player. He'll portray a a "sophisticated, iconic tycoon that the four [CEOs] aspire to be." The series focuses on four CEOs (Michael Vartan, Dylan McDermott, Christopher Titus, and Joshua Malina) who frequent the same posh country club.

In other casting news, Jessica Collins (The Nine) has joined the cast of Heroes next season, where she'll play a character named Sophie, a super-powered operative at the organization that tracks the heroes.

On tonight's episode ("Evolution of the Daleks"), it's the continuation of last week's caper, in which the Doctor new traveling companion Martha Jones visit Manhattan in the 1930s. Martha must deal with a critical situation on the top of the Empire State Building while the Doctor reaches out to form a deadly alliance while the fate of humanity hangs in the balance.

On tonight's installment ("Winter's End"), the wind-turbine blade finally arrives while April goes into premature labor, requiring emergency surgery, while Hawkins' past finally catches up with him.

Angela/SciFiChick said…
It figures. The one new decent show on the SciFi Channel. And it gets cancelled.
8/03/2007

Anonymous said…
@Angela/SciFiChick. I thought it was pretty meh but still head and shoulders above the horror that is Painkiller Jane or what I expect the new Flash Gordon to be.
8/03/2007

The CineManiac said…
That's pretty sad as I really enjoyed Dresden, it wasn't great but it was fun and Blackthorne was great as the lead.
8/03/2007

Anonymous said…
I hope, for ABC's sake, that they make Blackthorne's character British. Not that his American accent isn't great, but I do love to hear him speak in his regular voice.
8/03/2007

Matt said…
I read a couple of the Dresden files and it kept coming across as trying too hard to be cool and gritty. I caught exactly 3 minutes of the show but I got the exact same impression from it.
8/06/2007

Zarina said…
The fight is FAR from over!

While we're very happy that another show/channel recognizes Mr. Blackthorne's talent, PB's is a recurring role, and he has stated that he would absolutely be interested in coming back as Harry. All we need to do - if Sci-Fi doesn't understand the quality of the show they let get away - is get the show a new home.

What we NEED is for folks not give up & to pitch in to the Save Dresden Campaign.

Victory is in numbers. Defeat is in capitulation.