Office Over-Expansion: Why "The Office" Hour-Long Eps Concern Me 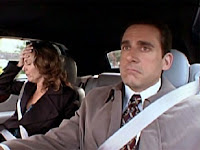 Everyone here knows how much I love The Office. I loved the British original way back when before anyone over on this side of the pond had even so much as heard of the thing; I bemoaned NBC's attempt to adapt the series for a US audience, following the debacle that was Coupling; and I grew to love the US Office after its first season. In my spare time, I create wish lists for Season Four of my beloved comedy series.

Clearly, I am an Office fanatic in every sense of the word. So what is making me so worried that I can't get the very fear off of my mind grapes? It's those hour-long episodes that former NBC entertainment president Kevin Reilly had touted at the network upfronts in May, right before he got the axe and Office executive producer Ben Silverman was brought in as the new man on the top of the totem pole.

You might be asking yourself why I'm so up in arms about the one-hour episodes if I'm a fan of the series. After all, isn't an hour-long episode just more of the show I love so much? Not quite. The Office is very distinctly a series that works best within its strict half-hour format. Sure, The Office can maintain its humor through an occasional one-hour installment ("The Job" and "A Benihana Christmas" were two examples of just that) or a super-sized episode when the story dictates the expansion, but more often than not, it's difficult to keep up the level of humor that we've come to know and love over a format that's more suited to dramas. Especially when you're dealing with the subtle and often squirm-inducing humor that has become The Office's bread and butter.

I don't blame the writers for this change in format; this decision was not an organic one created by Greg Daniels and the talented writing staff on the series, but rather, as Michael Scott himself might say, one handed down to them directly from Corporate. It's not easy to construct Office storylines--which tend to be rather about minutiae at first glance--around a one-hour structure, especially when your series has been a half-hour comedy for the past three seasons. How do you wring an hour out of such previous exploits as a funeral for a bird (a metaphor, really, for Michael's own fears of mortality) or the smaller stuff that makes The Office the cerebral treat that it is: a sales call, a birthday party, a game of office Olympics, an awards ceremony, a field trip. Can it be done? Sure. But why would you want to mess with something that already works so well the way it is?

Even more alarming to me is the decision to front-load the majority of these behemoth Office episodes at the beginning of the season, a choice that will undoubtedly put a strain on even the most coordinated production crew, affecting everything from the writers (imagine breaking nearly all of the one-hours right at the start) to the actors and everyone in between. Hell, it even puts a strain on the audience as well. (I'm betting that most viewers out there haven't even realized yet that the format of the series is being altered.) Sure, these episodes can later be broken down into two segments for repeats and syndication (the series will air on TBS this fall), but I find it hard to stomach starting a season, not with the half-hour format that the audience has grown accustomed to, but with one-hour double episodes.

Besides, wouldn't it make more sense, both creatively and from a marketing standpoint, to hold these super-duper-sized Office episodes for things like... sweeps? With five one-hour installments, why not start with a single one-hour and then post one in November, one at Christmas, one in February, and save one for the season finale in May? Then these might feel more like a reward to the audience rather than a capricious move by a network that seems to have greedily realized that the audience in hungry for more Office.

But rather than have a glutton's feast of Dunder-Mifflin upfront, I'd much rather space out these meals into tasty morsels along the way. Or just have more, regular-sized entrees along the way. But that's just me. I'm curious as to what you think about these one-hour installments. Are they a sign of positive change or an indication that Michael Scott himself is running this network?

"The Office" launches its fourth season on September 27th on NBC.

The CineManiac said…
More often than not the hour longs seem forced rather than organic. I agree with you that it's troubling to have not only 5 hour longs, but all at the beginning of the season.
If I were the writers I think I'd try to just make two separate episodes and join them together and call it an hour.
8/13/2007

Anonymous said…
I agree with your post. I think that these episodes aren't the smartest idea and even if NBC was going to do them running 4 of them so early is just a mistake. I like my Office best as a half an hour comedy.
8/13/2007

Anonymous said…
The whole thing is weird. It's weird that they're doing so many one hour episodes and even more weird that they're stacking most of them at the beginning of the season. The only good thing is that at least the writers know in advance which episodes will be one hour instead of having to scramble at the last minute to add material to something that was supposed to be 1/2 hour. But I don't think this was a good decision and could be detrimental to the show.
8/13/2007

Anonymous said…
It is a sign that some greedy greedy people are running NBC. They would rather run this show into the ground for a fast buck then think about the long term effects of this move. The Office is a 30 minute show and should stay that way. Just like I wouldn't expect Lost to become 30 mins long each week.
8/13/2007

Anonymous said…
I don't necessarily think that the 1-hour Office eps are a bad thing, as Bella mentioned the writers at least had a heads up that they were coming. But it's just plain stupid to put them all at the beginning of the season like that. I love the show but don't know if I can sit through 4 hours of it for a month like that.
8/13/2007

Anonymous said…
Plus, at 30 mins, the show has nailed the "leave 'em wanting more" adage. Those 30 mins pass by so quickly... and I always want more, more, more. But that's a good thing. Feed people too much, and they get full.

Now excuse me while I go construct some other super-compelling metaphors.
8/13/2007

Anonymous said…
I agree with Great White Snark (great name by the way). I think the show works best when it leaves us wanting more rather than beating us over the head with too much. Count me in for being concerned.
8/16/2007

Anonymous said…
I'm going to be the voice of dissent for a moment.

There was some scuttlebutt that the super-sized episodes later in the season were sprung upon the creative time with short notice. The better expanded episodes, like Benihana, were the product of advanced notice.

The creative team has had the whole summer to put together these first four hour-longs. They've certainly proven themselves before. I bet we're in for a real treat.
8/30/2007

Smartemiss Heartemiss Tartemiss said…
Mainly my problem is watching the episode, a nice half hour used to fit in nicely, it was short and well rounded; the hour long ones just feel so drawn out, and it might be because of this feeling that the 2nd half of every episode just feels empty and devoid of anything important.
10/19/2007

Anonymous said…
Please go back to 30 minutes (really probably 17). This kind of humor can only be enjoyed in smaller doses. Once I rented Larry David on CD. After 3 episodes in a row, I was ready to slit my wrists. I'm going to punt on the Office if it stays one hour.
10/22/2007