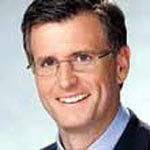 Ah, how fast they grow into the job.

Recent hire Kevin Reilly, late of NBC, has planted his first seed as the new FOX entertainment president, ordering a series that every major network in town has been vying for over the past few weeks.

The project, The Oaks, was given a series commitment by Reilly, along with a substantial seven-figure penalty. (Ouch.)

Series, from writer David Schuler (HBO's Tell Me You Love Me) is a high-concept relationship drama with strong supernatural elements; it will revolve around three couples who live in the same house during three different time periods (1967, 1987, and 2007) who are linked by enigmatic spirits who haunt the building.

Reilly was quick to hire a high-profile showrunner to oversee The Oaks, snagging The Shield creator Shawn Ryan to executive produce, and hiring Dexter's Michael Cuesta to direct the pilot and exec produce.

Production on The Oaks' pilot will begin in November. Given the general near-hysteria looming over LA about a possible strike-related work stoppage, it only made sense for FOX to push The Oaks straight into series and bank a bunch of episodes. Reilly and FOX are already seeking additional writers to join the staff straightaway.

Lest you readers fear, I am already attempting to snag a copy of the pilot script.

Anonymous said…
This show actually sounds like it has the potential to be excellent. Would I be right to assume that, based on the penalty, FOX will most likely promote this heavily and air it behind American Idol? I hope they do and I hope the show turns out well.
8/06/2007

Anonymous said…
Huh. Haven't heard of this show until now. I'm curious to see what all the hype is about. I hope you get your hands on the pilot script as I'd love to hear what you think!
8/06/2007

The CineManiac said…
Anonymous,
Since the show does sound intriguing I have to assume Fox will be its normal self and promote the show half heartedly, air 3 or 4 episodes, yank it and rip out the hearts of millions of fans.
Also they might move the air date around without warning just to further mess with us.
Just ask Tim Minear.
8/06/2007

Anonymous said…
Looking forward to hearing your thoughts... this concept sounds like it could go either way. Based on the involved personalities, I'm envisioning something that's a bit more, um... sophisticated than Fox is accustomed to airing.
8/07/2007

Anonymous said…
I got to be part of a test audience for the pilot--it was sooo good! I can't wait until it airs--you will NOT be disappointed!
2/03/2008