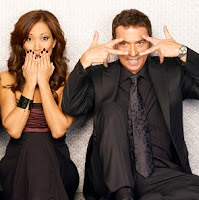 Every now and then you stumble on a monumentally bad title for a television series. Often it's the name of an equally horrific series (Shasta McNasty and One Tree Hill come to mind) and sometimes the series is actually good in spite of such a bad title (Dirty Sexy Money, Samantha Who).

But then there's the rare gem of a pitiful title that belies not only an inherent weakness but an ability to make the American public question all rules of grammar, spelling, and good taste.

I'm talking, ladies and gentlemen, about the title for the spinoff series of ABC's hit reality competition series Dancing with the Stars. It's been previously referred to as Dance X or Dance Wars; those titles positively gleam with thoughtfulness and intelligence in comparison.

According to a source close to the production, the title that the producers have now chosen is... DanSing.

Before you ask, that's not a typo; yes, the S in the middle of the misspelled word is capitalized. As for the why, I'm told by the same source--who wishes to remain anonymous--that the competition series is broadening its purview from strictly (come) dancing to dancing and singing.

Yes, the competition series--led by Dancing with the Stars impresarios Bruno Tonioli and Carrie Ann Inaba and hosted by Drew Lachey--will be an all-singing, all-dancing review in which the teams will compete both vocally as well as, er, choreographically.

I'm not sure why the shift in focus here other than an attempt to steal a singing beat (heh) from American Idol, which launches in January. But, seriously, couldn't they at least have come up with a better title than that?

The CineManiac said…
the entire show sounds awful, so why should the title be any different.

Also can I just ask, why are people still watching Cavemen?!?!? It makes me ashamed of the millions of people watching it, is there a way to jettison them to their own island?
10/16/2007

Vance said…
I laughed out loud when I read that title. I kinda like it in a twisted way. but I too thought. So what about this Dan that can sing?

Wait. if they can dance and sing, isn't that... like a musical theatre performer? though everytime I say grease Im the one that I want, it seems dirtier and dirtier in my mind.

(that being said, the CDN reality show Triple Sensation was actually REALLY good but probably cause it was NOTHING like an American produced network show and more PBS'y, but don't worry, we're apparently getting Whats The Problem With Maria?)
10/16/2007

Aaron Weber said…
I have to say I think that "Dirty Sexy Money" is a good title, since the show is about the appeal of filthy lucre. In other words, the money the protagonist is offered is seductive, but also dirty.

Danielle C.F. Maris said…
Yes, "Dirty Sexy Money" makes sense as a title but it is pretty cheesy. I think originally it was called "The Darlings" which I really like because it has such a fun double meaning. I love the show but every time I see the opening and the title come on in those bold, bright colors that conjure up images of the 80s, I can't help but giggle.
10/16/2007