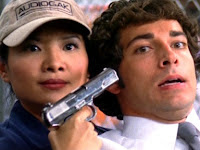 I'll admit that I wasn't all that crazy about last night's episode of Chuck ("Chuck Versus the Sizzling Shrimp"), which wasn't bad per se, but did feel like a bit of a throwback to the series' second episode, a less-than-impressive entry that didn't so much advance the characters as it did keep them treading water for an hour or so.

Yes, we did learn--via the uber-obvious October Mother's Day that Chuck and sister Ellie celebrate--that the Bartkowski sibs had their mother walk out on them and their father slowly fade away into nothingness, which is why they learned to fend for themselves so admirably. (It might also explain why computer whiz Chuck is stuck in a dead-end job with little ambition or self-esteem.) And, yes, it was cute when Ellie helped Morgan keep his job by buying $700+ worth of electronics at Buy More (not that his job was really in jeopardy). But other than that, the episode was extremely short of any character development.

Part of the problem may have been the emphasis on Morgan this week, so soon on the heels of last week's somewhat Morgan-centric plot. Don't get me wrong, I like Morgan, but he's best used in... small doses rather than sustaining his own plots so early on. His character--a variation on the socially awkward and pathetic hanger-on--isn't as nearly as well drawn as the others and we need a little bit more fine-tuning before we can set him loose on the world again. I keep hoping for some kind of hidden depth or something that makes him stand out a little more from BFF Chuck with whom he's a little too similar.

So what did work this week? I loved the fact that Chuck made a mix-tape for the stakeout, complete with "Private Eyes," the kick-ass fight sequences with Chinese spy Mei-Ling, the fact that James Hong again played a shady character named Lo Pan (as in Big Trouble in Little China), Chuck inventing a spastic colon as the reason why he stayed in with Sarah instead of coming to dinner with Ellie and Morgan, Jeff and Lester, Chuck ordering takeout from the Bamboo Dragon (sizzling shrimp, no less) during a stakeout, and the fact that, rather than listen to Sarah and Casey and stay in the car, Chuck hatches a plan to use fireworks to create a diversion and then free Mei-Ling, her brother, and his handlers.

What didn't work in my opinion? The overemphasis on Morgan, which may become a problem the more Chuck spends away from his best friend. How unlikeable the writers made Chuck's sister Ellie last night. Yes, I get that this is a momentous day for them to honor but cut the guy some slack, he has a girlfriend.. and for the first time since Jill might be happy. (Yes, I know Sarah's not really his girlfriend but Ellie doesn't.) No Captain Awesome. The fact that Sarah probably uttered about ten words in the entire episode and sort of blended right into the background; to me, it's their repartee and interaction that drives the series.

I like that the series functions as a procedural each week, offering Chuck a new mystery o' the week to solve, but with episodes like this, there's almost too much of a simplicity to them. I do want a serialized undercurrent--even if it's just the characters that change and grow--mixed in with the self-contained storytelling and "Chuck Versus the Sizzling Shrimp" just didn't advance the plot or the characters in any meaningful way, nor was it as strong an entry as some of the other installments. While I thought the fireworks were funny (especially with his muttering that he keeps his fingers), I am hoping that Chuck uses his smarts and ingenuity more than just dumb luck and distraction.

What did you think? Do you heart Morgan or are you hoping he's slightly pushed back into the background? Do you want more Sarah? What sort of stories should Chuck be telling?

Next week on Chuck ("Chuck Versus the Sandworm"), Chuck considers helping an agent get away from his handlers when he notices similarities between his circumstances and his own, while Morgan feels abandoned by Chuck as Halloween approaches.

Anonymous said…
I don't heart Morgan. There was too much Morgan in last week's episode but I haven't watched this week's yet. I'm surprised to not find any mention of the CW's Aliens in America on your blog (which by the way is excellent and one of the best I read regularly). I'm really enjoying Aliens in America. It's smart, funny, a little dark, a little topical. I don't see it getting much love.
10/23/2007

Vance said…
I didnt mind Elie being a bit mean last night because it was sort of understandable after the mother/father explanation. But I'm no fan of Morgan's. Again. small doses I can take but not more.

I agree with the previous poster. Aliens in America last night as AMAZING last night and probably even better than last week's Rocket Club episode. It's really hitting its stride.
10/23/2007

Susania said…
Morgan is tiresome. I fast-forward through Morgan. The character isn't funny or remotely interesting. I can see why they need a buddy for Chuck, but it would be nice if they could make him less boring.

I agree, this was one of the less successful episodes they've done so far. Very formulaic, and they are getting dangerously close to "Scarecrow and Mrs. King".
10/23/2007

Anonymous said…
Morgan is the absolute worst part of this show. When The Sarah Connor Chronicles starts in January, Chuck will be off the DVR primarily because I can't stand Morgan.
10/23/2007

Shawn Anderson said…
I haven't been fond of Morgan, but he finally grew on me this episode. Finding out that part of his desperate behavior is tied to looking out for others (during the Glen Gary Glen Ross-like sales competition) made him seem a lot more human and less side-schticky.
10/23/2007

Danielle C.F. Maris said…
Let's face it. Morgan's just not funny. I don't know if it's the actor or the writing but I really couldn't care less about him and his antics.

And the rest of last night's episode was less than stellar. I like "Chuck" but it's not living up to its full potential. This episode not only lacked character development but also laughs and action. Which is what this show should be all about. Yes, there were action sequences but they were pretty yawn-inducing compared to the pilot.

I will keep watching it, though, in the hopes that they'll finally hit their stride and make this show as great as it could (and should) be.
10/23/2007

Media Maven said…
Completely agree about this episode treading water. It's entertaining, but what's the point? We could've seen this episode at any point in the season and would've fit just as well.

Dani In NC said…
I agree with Susania: "Scarecrow and Mrs. King" was the first thing I thought of after watching the pilot of this show. In my case, however, that was a compliment because I liked that show :-).

As for Morgan, I can't stand him. He was almost bearable in this episode, but I would like to see him go away. I would also like to see more of a reason why Chuck was admitted to Stanford in the first place. He had to be smart to get in there, didn't he? So far we are seeing too much of the socially awkward side of the geek with very few flashes of the brainy part.
10/24/2007

Chris said…
As a random sidenote, this episode holds up very well as a historical reference point now that we're through season 2. Its a strong background to Chuck versus the Best Friend in season 2 and really, its just a lot of fun!
4/29/2009