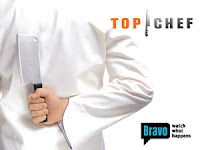 One thing that has driven me mad about Top Chef over the years is that, while they claim to all about the culinary competition, they still haven't been to the one city where restaurants truly live or die every single day of the week: New York City.

That criticism may no longer be valid, at least according to the New York Post, which claims that the fifth season of Bravo's Top Chef will film in Williamsburg, Brooklyn, following rumors that the series would film in New Orleans.

Personally, I think it's about time that we got to see the cheftestants attempt to cut it in the Big Apple (or, well, one of NYC's outer burroughs, anyway) and I am just itching for Season Five to begin already. If producers have already been able to lure some serious A-list chefs to guest judge on the series when they were shooting in other cities, just imagine who they'll be able to get when they're filming in these chefs' backyard.

Anyone up for Tony Bourdain joining Top Chef full-time? Anyone?

Looking to relive the freshman season of the teen soap? On tonight's repeat episode ("Hi, Society"), Serena's grandmere blows into town and insists that her granddaughter not only attend the upcoming debutant ball but that she finds a more suitable escort than one Mssr. Dan Humphreys. Ouch.

On this week's episode of Weeds ("The Three Coolers"), Nancy asks Andy to go with her on another mission down South; Celia ramps up her flirtation with Captain Till; and Doug drops by for a visit with the Botwins.

On tonight's episode, Belle gets some upsetting news: ex-boyfriend Ben is engaged to current squeeze Vanessa. What is a call girl to do? Find out tonight.

Anonymous said…
Finally NYC! I would love to see Tony Bourdain as a full-time judge but I don't think the contestants could handle it!
7/07/2008