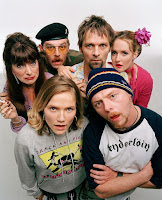 Today's the day. What's that, you're asking? The day for what exactly?

After waiting and moaning and waiting some more, today is the day that loyal US viewers of the supremely hysterical and witty UK series Spaced--written by and starring Simon Pegg and Jessica Hynes (née Stevenson) and directed by Edgar Wright--finally is released on DVD in the States.

For those of us who know and love Spaced with a zeal that knows no bounds, the DVD of Spaced: The Complete Series--which is released today with a suggested retail price of $59.99-- has been a long time coming. We've hoped, prayed, and made Faustian bargains to get those music rights cleared for use so that we can hold that box set in our hands. (Thanks to the good folks at BBC Video, I got mine early and have spent the last few days in Spaced heaven.)

If you aren't familiar with Spaced, I feel for you, I really do. Spaced is the ultimate geek pleasure, a series so laden with pop culture riffs, comic book allusions, quirky characters, in jokes, and filmic homages that, unless you are a veteran member of the geek kingdom (all rise who are), it might be hard to follow the gags without a guidebook.

Ostensibly, Spaced tells the sitcom-ready story of twenty-something slackers Tim (Pegg) and Daisy (Hynes) who both find themselves between housing situations. Meeting in a coffee shop one day and hitting it off, they spy an ad in the newspaper for what seems like an ideal living arrangement. The only catch: the ad specifically says professional couples only. What are two house-hungry, cash-poor kids to do but pretend to be a couple in order to land the place? Of course, they have to fool alternately sullen/optimistic alcoholic landlady Marsha (Julia Deakin) into believing they're a couple... achieved through a brilliant montage in which they reveal details about their pasts, pose for holiday snaps, and construct an elaborate lie that wouldn't really hold up weight if they're questioned.

Tim and Daisy drag their respective best friends into their hastily constructed lie: Tim's best mate is Mike (Nick Frost), a gun-crazy member of the Territorial Army who was suspended after stealing a tank and attempting to invade Paris; Daisy's BFF is the bitchy Twist (Katy Carmichael), who claims to work in "fashion" but really works in a dry cleaner. Quickly, their eccentric artist neighbor Brian (Mark Heap) catches on to Tim and Daisy's true relationship but he nobly decides to cover for them, joining their gang of borderline psychotic personalities.

While Spaced's set up could have quickly descended into Z-grade sitcom buffoonery, Pegg and Hynes--aided by the stunning visual style of Wright--elevate the material considerably, constructing a comedy that is as much about the aforementioned wink-wink-nudge-nudge jokes and sight gags (if you like Scooby Doo visual jokes or worship at the shrine of Buffy, this is the series for you) as it is about the minutiae of life for a twenty-something Londoner at the turn of the millennium. The result is a series which never manages to become cartoonish, characters that never turn cloying, and a concept which could have yielded at least another season.

The DVD set contains all fourteen episodes of Spaced, spread out over two seasons, along with a host of extras, including: episode commentaries with cast members Simon Pegg, Jessica Hynes, Julia Deakin, Mark Heap, Nick Frost, Katy Carmichael, producer Nira Park, and director Edgar Wright; brand-new bonus commentary tracks featuring the likes of Kevin Smith, Diablo Cody, Matt Stone, Bill Hader, Quentin Tarantino, and Patton Oswalt; outtakes; the "Spaced Jam" music video; raw footage; cast and crew bios; footage of the 2007 Spaced stage reunion; and "Skip to the End," a feature-length documentary about Spaced which aired on Channel 4 in the UK and which features at its very conclusion, the absolute perfect ending for Spaced: The Series, featuring a reveal so pitch-perfect that any fan will turn into an absolute puddle of goo. Whew.

I'm happy to say that these episodes have not only held up, but held up magnificently since their original airing, Matrix jokes notwithstanding. (For an example on how not to do brilliant parody, sublime homage, or quirky comedy, check out my review of the pilot for the US version of Spaced, which was outright terrifying in its lack of humor and grace.) The guest stars--from Little Britain creator David Walliams (stunning as Brian's lost love, a transgender performance artist named Vulva) to Black Books' Bill Bailey and a certain Office creator--astound as much today as they did years before; it's as though Spaced caught these luminaries right on the cusp of stardom.

But it's Spaced's regulars who keep us coming back for more. In the hands of gifted writer/actors Hynes and Pegg, Daisy and Tim remain wholly real, picture-perfect snapshots of the late 1990s/early 2000s slacker dissatisfaction, underachievers who--despite our collective will--can barely manage to get up off the sofa, much less change the world. And that's perhaps why we love them so much: that they teeter on a knife's edge between sanity and (relative) madness at any given time.

Together, they face the trials and travails of semi-adult life: looking for jobs, losing jobs (and, in a glorious One Flew Over the Cuckoo's Nest homage episode, landing the job from hell), getting a dog, falling in love, falling out of love, and figuring out what the bloody hell you're going to do with the rest of your life... while, all along, not realizing that their best, most perfect, partner is right there on the couch with them. Along the way, the duo attend raves, argue, fend off teenage hoodlums and Matrix-like government agents with a combination of pantomimed gunplay and actual high-flying action, battle (imaginary) zombies, attend experimental theatre productions, play video games, and have drunken conversations about the meaning of life. If that doesn't sound like your twenties in a nutshell, I don't know what does.

Ultimately, Spaced: The Complete Series is a three-disc set that any Spaced fan--present or future--should have in their collection and will treasure for years to come. As Marsha might do, why not open a bottle of red wine (or three or four), settle back on the couch, and enjoy? You'll thank me afterward.

Season Two continues tonight with a brand-new episode ("Looks Like New"), Jeff makes Chris take the bus, leading to a teary breakdown; Jeff and Ryan return to work for Courtney but discover that she may only want to employ Jeff and not Ryan.

Unknown said…
This past weekend, I saw some local LA theater and when the play started all I could think of was Daisy standing on the stage yelling "Rabbit! Rabbit! Rabbit! Rabbit!" and I seriously almost lost it. I'm so excited for this!
7/22/2008

Danielle C.F. Maris said…
The included documentary is fantastic. It's almost as hilarious as the show itself and reveals great tidbits, like the fact that the biggest diva on set was, apparently, the dog. Seriously! Overall, a brilliant DVD set for a brilliant show and a must have for any Spaced fan.
7/22/2008

Anonymous said…
I had never heard of this but I've gone ahead and ordered it from Amazon based on your recommendation. It sounds hilarious.
7/22/2008

Anonymous said…
I've been waiting for this to come out here for years. I can finally get rid of my awful bootleg copies and buy the official thing. Thanks for the great review and thanks to Simon, Jessica and Edgar for a great show.
7/22/2008

Anonymous said…
GREAT review. I forgot about the One Flew Over the Cuckoo Nest/Fight Club episode which was amazing. I am going out now to go get this.
7/22/2008