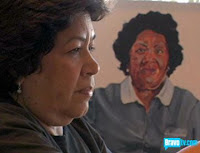 I have a serious, serious problem: I am completely addicted to Bravo's docusoap Flipping Out.

I went on and on about this hysterical series last year when the cabler aired the first season of this series, which focuses on the high-paid antics of real estate prospector Jeff Lewis and his band of co-dependent staffers, including executive assistant Jenni, housekeeper Zoila, and trash guy Chris, and his tempestuous relationship with former lover-turned-business partner Ryan, as they flip houses and, well, spend a lot of time dealing with Jeff's OCD-fueled tantrums.

If you're looking for a guide on how to make money in the sinking ship that is the Los Angeles real estate business, look elsewhere. Now in its second season, Flipping Out hasn't changed it's modus operandi; it's still not really about the houses themselves (though the progress Jeff made on Commonwealth is stunning in itself) but about these incredibly flawed but captivating characters. Jeff is still a tyrant among tyrants, flipping out (oh, you knew I had to say that at one point) about the smallest things, like that his Starbucks latte seems more like 150 degrees rather than 140 or that Jenni selfishly wants pepperoni pizza when he wants meatball. Things like that.

Adding to Jeff's stress this season is a massive renovation project on a historic 1911 home in Hancock Park and a client--Courtney--who gives Jeff a run for his money in the demanding diva department. She's not afraid to stand up to Jeff to get what she wants, even when those demands are erratic and illogical. And Jeff can't stomach being bossed around by someone he describes as a "nutjob." Of course, these two are so similar that it's no wonder that their every conversation throws up a series of blazes between them. With wildfire season in full swing, it's a dangerous situation.

Last week's episode ("The Flip Side") was an absolute gem, focusing on Jeff's long-suffering housekeeper Zoila, who has recently gotten her US citizenship as well as some ideas of her own, like asking for her birthday weekend off from work (Jeff is angry as she did have Christmas off) and talking about Lincoln's emancipation of the slaves. For his part, Jeff decides to get Zoila an oil painting of herself by a local artist for her birthday... only the thing is absolutely hideous, portraying Zoila in an unflattering light and depicting her as a hellion in a maid's uniform. One of the reasons I love Flipping Out is that it's hard to tell quite when Jeff is being serious and when he's joking but sadly this instance was no joke as Jeff honestly thought he was doing something nice for Zoila... and then leaves it to Jenni to explain to the artist why she needs to "redo" the piece and eliminate some of Zoila's chins. Ouch.

Why I watch isn't necessarily to see when Jeff will flip out (at least, oh, a dozen times an episode) but to see when Jenni and Chris (not to mention my beloved Zoila) will finally snap. Do they get away with a lot off stuff that they wouldn't be able to at any other office? Hells yeah, but Jeff Lewis is a demanding, controlling, and mercurial employer whose constant demands wear down a person's sanity after a while. How this married couple can stay together when faced with a hellstorm of biblical proportions day in and day out is beyond me (and this is coming from someone who recently tied the knot himself). That day of reckoning may still be in the future, but in the meantime, I can't get enough of seeing them pushed to the brink and still managing to come back for more.

Having worked in the entertainment industry in Los Angeles for going on six years now, maybe it's the masochist in me that sees its reflection in the Jeff Lewis Company staffers on Flipping Out. Or maybe it's just the fact that this series makes me laugh out loud in a way that very few scripted comedies can these days. Take your pick.

Tonight on a new episode of Flipping Out ("Good Cop, Bad Jeff"), Jeff becomes suspicious of his assistants when he notices that not much is getting done around the house and wants to install surveillance cameras to keep an eye on his employees.

Anonymous said…
I have absolutely no interest in real estate or flipping houses but this show is one of my favorite guilty pleasures, providing fizzy fun that's just right for a hot, LA summer.

So many reality shows focus on people trying to be someone else. And I think that's why I love Flipping Out so much...because Jeff and Jenni and Chris (and Zoila!) are unabashedly themselves. No apologies. You know that, even if the cameras were off, their mad little world would remain the same, which I find strangely comforting.

Danielle C.F. Maris said…
Poor Zoila! It wasn't that it was a bad painting...it just was not flattering at all. As Jenni said, it was more "edgy" and not a glamour shot.

It would be one thing if Jeff wanted the painting for himself but to give someone an unflattering portrait of themselves (in their work uniform, no less) for a birthday gift is just cruel.

greebs said…
First, congrats on the nuptials, Jace. Marriage is awesome despite the bad press.

As far as Flipping Out, I too love this show. I do, however, think that Jeff knew the painting was awful from the start - and at the end he made a joke about it that seemed to vindicate that. I actually think he's joking a lot more than one might think - his remark that, "What am I going to do if you are off? Who is going to make me breakfast?" was not nearly as self-serving as it seemed. I think he was joking about how high maintenance he is...

Anonymous said…
I know Jeff and Ryan and they are pretty accurately depicted on TV. Jeff is quite nice and funny and quite aware of how he's portraited on TV. I prefer this show so much more than those other "OUT" show with Jacky Warner (total narcissitic bitch - trust me I know) and Jonathon Antin (another narcissitic bitch - trust me I also know ... LOL).
7/01/2008