Channel Surfing: Lawsuits Aplenty with "Gilmore Girls" and "Two and a Half Men," Cassidy No Longer "Privileged," and More 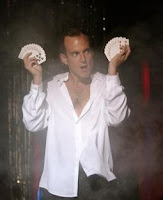 Welcome to your Monday morning television briefing. I'm still recovering from the, er, excesses of the past holiday week and still have a stack of screeners to get through before the New Year.

Paging GOB Bluth: Will Arnett is ready to reunite with his Arrested Development co-stars for the big screen debut of the Bluth clan as Ron Howard and Mitch Hurwitz rally the troops. "It’ll be fun to get back together with everybody and work on it,” says Arnett. “It’s been so long now, we almost have to do it. It’s like we have to finish the joke.” Arnett meanwhile offers his trademark comedic spin on the Arrested film in an amusing jab at the state of the economy. (Entertainment Weekly's Hollywood Insider)

Dexter's Lauren Velez will guest star in a multiple-episode story arc on ABC's Ugly Betty this season; she'll play Elena, a nurse who becomes entangled in the lives of the Suarez clan. POSSIBLE SPOILER WARNING: Details are sketchy but there is word that she is involved in a plot twist that could involve the death of a major character. Say your goodbyes to Ignacio now. (Hollywood Reporter)

Due to budgetary and creative reasons, Michael Cassidy will leave the CW's freshman drama Privileged after the series' fifteenth episode, in which Cassidy's character, Charlie, will return to college. "Charlie will be leaving town," creator Rina Mimoun told Michael Ausiello, "but not until some hot and heavy kissing goes down." Ratings on the series are up by double-digit gains after the netlet scheduled Privileged after Gossip Girl, but there's no guarantee of a Season Two. "Right now, I'm more concerned about Privileged returning for a second season than just Charlie," said Mimoun. "If everyone wants both, then I think we have a shot!" (Entertainment Weekly's Ausiello Files)

The CW's Gilmore Girls is back in the news again but, sadly, not because of anything good: former executive producer Gavin Polone's company Hofflund/Polone has filed a breach-of-contract lawsuit against Warner Bros. Television, claiming that Warners has "colluded to defraud the originator of hit Gilmore Girls television series with a scheme that rivals the greed and bravado of any story line defendants could script." The company claims that Warners has defrauded them by stating that Gilmore Girls ran at a deficit through all seven of its seasons; Hofflund/Polone was guaranteed a percentage of the "modified adjusted gross" in a 2000 agreement and a 2002 amendment. (Hollywood Reporter)

That lawsuit comes just a few days after Warner Bros. filed a lawsuit of their own: against CBS, the home of the Warners-produced comedy Two and a Half Men. The studio has filed a $49 million lawsuit against CBS, claiming that the network has refused to reimburse the studio for production costs ("deficit recoupment") for the first four seasons once the comedy became a ratings hit, under the guidelines of their license fee. (TV Guide)

And in other lawsuit news, a federal court has rejected Lifetime's bid for a change of venue to move its current legal battle over the future of Project Runway out of a New York state court. (Variety)

HBO's Flight of the Conchords sophomore season premiere racked up 250,000 streams in its first ten days on FunnyOrDie.com, in addition to thousands of streams on HBO.com. (Hollywood Reporter)

The Los Angeles Times has named Battlestar Galactica's Tahmoh Penikett, who stars in FOX's upcoming midseason drama Dollhouse, as a face to watch. Penikett refuses to get stressed about fans' fears about Joss Whedon's upcoming series. "I don't like panicking," said Penikett. "I'm also old enough now where I try not to stress over things too much." (The Los Angeles Times)

BBC Three has commissioned six episodes of supernatural drama Being Human, which aired its pilot earlier this year on BBC Three as part of its pilot season. The series, which stars Russell Tovey (Doctor Who), Lenora Crichlow (Sugar Rush), and Aidan Turner (The Clinic) as three flatmates--a werewolf, ghost, and vampire respectively--who live together, was created by Toby Whithouse (Torchwood) and will air in 2009. (BBC)