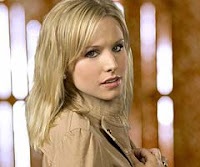 Veronica Mars fans are definitely going to be waiting a while to see their favorite blonde crimesolver hit the big screen... especially as creator Rob Thomas still hasn't finished an outline for the feature film, much less started on the script.

Thomas has been extremely busy of late, with not one but two television series in production, including ABC's Cupid (launching March 24th) and Starz half-hour comedy Party Down (which was ordered to series back in October). Thomas first mentioned the possibility of a Veronica Mars feature film (and discussions he had with star Kristen Bell) back in August. (Suffice it to say, Thomas has had his hands full between those projects and his latest: a new son.)

"I thought I had the idea broken, but I've hit a wall in the final act that I haven't quite figured out," said Thomas. "And with Cupid and Party Down occupying 80 hours a week, and a new baby boy occupying the remaining hours, I haven't nailed it down. I'm hopeful that I can find the time to figure it out over the Christmas holidays."

I'm still trying to remain optimistic that a Veronica Mars feature film could come together before too long. It's been far too long since I've gotten a new Mars fix and I miss the series' trademark wit, humor, and noir-tinged mysteries. Fingers crossed.

Anonymous said…
I want Rob to work on VM instead of the Cupid or Starz one which sounds bad. I would pay $ to see a VM movie and everyone I know would to.
12/03/2008

Anonymous said…
Your "Mission to Mars" title is too funny!

It looks like we may never see the Veronica Mars movie. And maybe that's not such a bad thing. I finally have closure and have come to terms with one of my favorite shows being yanked from the air. I would only want to reopen that wound if the material was truly exceptional. Maybe Thomas feels the same!
12/03/2008

Anonymous said…
Whats going on with that other show he was working on?, i actually forgot the title.
12/03/2008

Jace Lacob said…
Art, I take it you're referring to "Good Behavior"? It is allegedly still in contention for a pickup for the 2009-2010 season though I hear that there could be some recasting/reshooting should ABC decide to keep the pilot alive and kicking.
12/03/2008