"Nobody Wins with a Deviled Egg": Judgments Aplenty on "Top Chef" 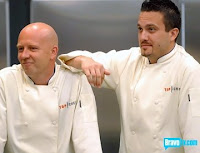 You didn't really think the Top Chef judges were going to send anyone home in a Christmas episode, now did you?

I knew as soon as I saw all of the cheftestants pitching in to help Hosea and Radikha out on last night's episode of Top Chef ("12 Days of Christmas") that there would be no elimination this week, even as Tom and the judges were pretty disappointed with their dishes this week. Yes, the challenge was a tough one; catering for a crowd of 300 people at a charity cocktail event is stressful, especially as they only had three hours to prepare and two of them had to redo the main components of their dish from scratch after someone left the refrigerator door ajar.

So it was a bit of a cop-out ending, but I knew for certain as soon as Tom said he wanted to speak to all of the chefs that no one was packing their knives and going home. Even the tough-to-please judges have a soft spot for teamwork, especially when it does coincide with a pre-holiday airing on Bravo (despite whenever this episode was actually filmed). Probably a good thing as Jamie could have been the one to go home this week and I really did not want her to leave the competition.

Loved the Martha Stewart one-pot wonders Quickfire Challenge, even if I felt that several of the chefs didn't actually create dishes in one pot. And the fact that Ariane won yet again for cooking meat well rubbed me completely the wrong way, especially as her herb-rubbed beef fillet with cauliflower puree was not at all a one-pot dish in the true sense of the term. I expected the chefs to come up with some modern and inventive takes on stews, braises, and similar cooking techniques, even with the limited time at hand.

I actually thought Jamie or Hosea should have won the Quickfire. Jamie constructed a beautiful winter stew of potato and kale with sea scallops and fried sage that looked incredible and met the brief of being one-pot to boot. I don't usually like paella but Hosea's paella with fish, chicken, shrimp, and chorizo looked incredible. Both were much more ambitious than Ariane's dish and it drives me up the wall that Ariane continues to win challenges while Jamie keeps getting overlooked week after week. Grr.

The Twelve Days of Christmas Elimination Challenge was definitely a tough one, especially as the chefs weren't placed into groups but had to create a dish for Natasha Richardson's AMFAR event on their own AND draw influence from one of the days of Christmas as well. Some of them--four French hens, a partridge in a pear tree, for example--lent themselves very easily to be translated into dishes. Others not so much.

But the results were all over the place. Jamie should have definitely seared that scallop (again with the scallops?) rather than serve it crudo-style--and lukewarm--in a pool of vichyssoise. Carla's dish of braised chicken and mushrooms was bland and one note; it's pretty amazing to me that she's managed to stay in the game as long as she has. Fabio's corn and roasted pepper crab cakes with chipotle lime were dry and overly greasy. The less said about Melissa's gorgonzola and New York strip steak on crostini with cranberry vinaigrette the better.

On the plus side, Radikha's dish of braised duck legs and pear chutney on toasted brioche with toasted pistachios sounded absolutely amazing and Hosea's smoked pork loin with chipotle mashed potatoes, braised cabbage, and apple jus easily was the crowd favorite. Jeff could have done without using the haloumi AND kaseri as well though his salad with its roasted beets, peas, and spiced nuts was a judges' favorite as well.

But for Ariane to make deviled eggs, no matter how good they were, was to misunderstand the point of the exercise and the competition. Tom is right: no one wins for a deviled egg. You need to be wowing the judges, especially at this point in the season, and you need to be pushing yourself to deliver exceptional food week after week, not coasting by with overly simplistic recipes and concepts.

As for Eugene, I'm really not sure what's happened to him. He started off really strongly in the competition (even if he was overlooked repeatedly) but in recent weeks has really started to flag. His performance last night was one of his worst; his poisson cru with pineapple rings and Yukon Gold potato chips was overly sweet to be point of being saccharine. I have to think that if the judges had decided to send someone home, it would have been Eugene, especially as he steadfastly refused to admit that there was anything wrong with his dish.

All in all, a pretty good episode that pushed the chefs to their limits, even if none of them approached the challenge with that goal in mind. Many of them have been coasting by so far this season, which is shocking to me. Hopefully Tom's speech to them last night will reinvigorate them and force them to wake up and start cooking.

In three weeks on Top Chef ("Focus Group"), the chefs get to meet their new guest judge: overly opinionated author and journalist Toby Young. It's going to be brutal.

Anonymous said…
I know that it takes talent to cook meat properly but I cannot believe that Ariane won AGAIN. That's all she does. I'm all for simplicity but her dishes show absolutely no creative inspiration and I was thrilled when Tom called her out on the deviled eggs. I hope her winning streak soon comes to a screeching halt.
12/18/2008

Tillie said…
I too have been so frustrated with Jamie being repeatedly overlooked. I don't understand why she hasn't won...could be she'll come on strong at the end. She's honestly the only woman on the show that has any talent. The contestants as a whole don't feel as talented as last though.
12/19/2008