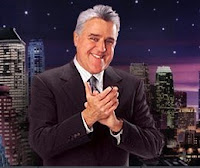 The news that everyone is talking about since yesterday afternoon is that NBC has handed over its 10 pm timeslot Mondays through Thursdays to Jay Leno, beginning Fall 2009. This has been rumored for the last few months but I don't think even NBC was prepared to make it fact until the recent economic (and ratings) downturn of recent times. First, it solves two issues: keeping Leno--who is losing his 11:35 timeslot to Conan O'Brien (while Jimmy Fallon will take over his old digs)--at NBC and thus out of the grabs of rival networks such as ABC and FOX; and allows the Peacock to continue programming the 10 pm hour instead of handing it back to the local affiliates. (Something, believe it or not, that was also widely discussed.) (Variety)

Which means that scripted television has just taken another hard-to-handle blow. If NBC goes ahead with its plans for a Leno talk/variety series at 10 pm weeknights and has Sunday Night Football and repeats on Saturday, that leaves just ten hours of programming remaining. Given NBC's propensity for reality franchises (Biggest Loser, Apprentice), expect to see even less comedy and drama at NBC next season.

Granted, NBC hasn't had a lot of success with its 10 pm series lately; one need only look at the floundering series My Own Worst Enemy and Lipstick Jungle for examples, while ER closes its doors this season and Law & Order: SVU represents really the only shot at success in the timeslot.

Does this decision make sense financially? You bet it does: NBC will be able to save a hell of a lot of coin producing a Leno-based "live" series than it would a scripted drama in that hour. But it does smart, just a little. Jeff Zucker claims that they aren't "retrenching" or "throwing in the towel" but it does seem like they are giving up on scripted programming five hours a week. And that makes me sad.

Other networks have said they are not looking to make schedule cutbacks at this time and one unnamed insider said that NBC's logic could be perceived as "counterproductive" because "it's like the automakers shutting down plants: It saves some money short-term, but it also prevents an opportunity to make any." (Hollywood Reporter)

Rumors are swirling that Grey's Anatomy's T.R. Knight has quit the ABC drama series. However an ABC publicist attempted to put the lid on such allegations by telling TV Guide that "T.R. has never walked off set in the middle of filming. He attended the table read [on Monday] and will be shooting this week, like any other week of production." Hmmm. (TV Guide)

UPDATE: Entertainment Weekly's Michael Ausiello says that "multiple sources" have confirmed to him that T.R. Knight has been asked to be cut loose from his contract and that Shonda Rhimes and the ABC executives are willing to fulfill his request, according to one source. ("They're working out the details now.") (Entertainment Weekly's Ausiello Files)

ABC will attempt to counter-program NBC's Super Bowl with a football-themed special episode of reality competition series Wipeout to air during the halftime concert by Bruce Springstein. Immediately following the Super Bowl telecast, ABC will air another special episode of Wipeout, in which cheerleaders compete against male "couch potato" sports fans, opposite NBC's hour-long The Office event. Strategy represents one of the most ambitious Super Bowl Sunday plans to date. (Hollywood Reporter)

Bravo has renewed unscripted series Flipping Out and Million Dollar Listing for third seasons. Also on tap for 2009: new seasons of The Rachel Zoe Project and Tabatha's Salon Takeover. (Variety)

Lauren London (Entourage) has been cast as bisexual cheerleader Christina Worthy on CW's 90210; she was seen in the November 18th episode attempting to flirt with Dixon (Tristan Wilds) but we'll soon learn that Christina has a girlfriend when the series returns on January 6th. (TV Guide)

TBS has ordered a pilot presentation for Frat House, a late night series from Bunim-Murray that will follow three comedians--Bret Ernest (Weeds), Theo Von (America's Prom Queen), and Bert Kreischer (Reality Bites Back)--as they push a group of guys at an impasse in their lives back into the simpler days of frat life. (Hollywood Reporter)

David E. Kelley is said to be "satisfied" with the series finale of his five-season-long drama Boston Legal, which wrapped up last night. However, he did have some parting words for ABC. "ABC didn't want us back," said Kelley. "It's as simple as that. They didn't even want us back for this year at all. We had to fight to get back on with 13. It's not a product they care to market." (Pittsburgh Post-Gazette)

Talpa and Endemol have dissolved their joint venture, under which Endemol had exclusive right to distribute Talpa's formats, by "mutual consent." (Hollywood Reporter)

Anonymous said…
Oh, NBC. Looks like all you're getting for Christmas is a big lump of coal in your stocking. Not even the incredible 30 Rock can make up for all of the mistakes you've made this past year.
12/09/2008

Anonymous said…
The NBC news is very upsetting. Almost as upsetting as how excited I am that both Flipping Out and Million Dollar Listing will be coming back for a third season.
12/09/2008

Anonymous said…
Wow...NBC just keeps making massive mistake after massive mistake. They really need to get a new president, Ben Silverman is not helping at all.

They could have just tried to produce some quality television, maybe on a cable budget? But no...instead the future of broadcast television takes a huge axe blow to the chest today...

Next we'll be hearing that NBC Universal plans to just shut down the entire network.
12/09/2008