Looking at the Face of the Enemy: The "Battlestar Galactica" Webisodes 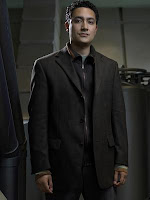 With the premiere of the final batch of episodes of Battlestar Galactica slated for next month, those of us addicted to BSG have been grasping at anything to fulfill our next fix.

Luckily then, that Sci Fi have chosen now to release a new batch of Battlestar webisodes entitled "The Face of the Enemy," new installments of which will launch each Monday and Wednesday leading up to the January 21st premiere of Battlestar Galactica's final episodes.

The premise? A Raptor, carrying a morpha-addicted Felix Gaeta, a few members of the Galactica crew, and some Cylon Model Number Eights, makes an unexpected detour when it seemingly jumps away from the fleet. When one of them dies under mysterious circumstances, everyone aboard the ship is a suspect. And, oh, we get to see who Gaeta has been dating.

Missed Part One? No worries as you can watch it in full after the jump.

I thought it interesting that Tigh would be so merciful as to give Gaeta some time away from the CIC, giving him a week's leave to drink, sleep, and do whatever it is he needs to do in order to recharge. (He's been seeing "ghosts on Dradis," not a good thing at all.) Seeing as Tigh has never been a particularly understanding or compassionate man and all.

I also thought that the fact that Battlestar Galactica's writers would make Gaeta gay (and dating Pegasus' Hoshi) was an interesting twist for this tortured character. The way with which the reveal about Felix's sexuality was casually handled in this webisode was a refreshing twist in a series that has embraced racial and gender equality. I'm glad to see Lt. Hoshi again though he's obviously quite an enabler for Felix's morpha addiction.

Just what leaves Felix covered in blood (that shot from the opening of the webisode) remains to be seen. But if the opening is any indication, it seems like it's going to be quite a bumpy ride for the crew of that Raptor.

Look for Part Two of Battlestar Galactica: Face of the Enemy to launch later today.

Anonymous said…
Oooh...a Battlestar murder mystery. I love it! I feel like the show has been gone for so long, though! The webisodes are great but not enough!
12/15/2008