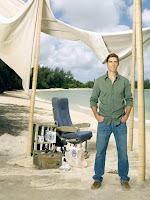 E! Online's Kristin Dos Santos is reporting that Lost co-stars Evangeline Lilly and Matthew Fox plan to quit television after the end of the ABC drama series and that Lilly wants to leave acting behind altogether. "I think this will be the last time you see me on TV," Fox told Dos Santos. "I'm either going to do the kind of things I want to do in the film world, or maybe I'll just do something else entirely... I've done almost 300 hours of [TV]. It's been two really great experiences between Party of Five and Lost. I'm ready to take it to the next step and see what I can do in that [film] world." As for Lilly, she is looking to continue in the film world in a capacity other than being in front of the camera and focus on philanthropic work in Rwanda. "I just haven't found where that is yet. I don't know if anything has gelled yet. I don't know if it fits," she told Dos Santos. "I want to have some quiet space. [I want to] drop off the radar a little bit and enjoy a little bit of normalcy again." (E! Online's Watch with Kristin)

In other Lost-related news, it appears that most fans didn't watch the version of the season premiere that had been leaked online over the weekend. [Editor: good on them!] (Hollywood Reporter) And Mike Hale of The New York Times has a fantastic interactive chronological timeline for Lost's narrative as well as audio quotes from Damon Lindelof and Carlton Cuse. (New York Times)

Matthew Broderick has signed on to star in NBC multi-camera comedy pilot Beach Lane, where he will play a celebrated author who represents the last hope for a struggling Hamptons newspaper owned by an oblivious millionaire. The Universal Media Studios-produced project, written by Paul Simms, is executive produced by Lorne Michaels and Marci Klein. Casting is the first time Broderick has signed on as a regular on a television series. The Peacock also gave out a pilot order to multi-camera comedy Perfect Couples, about three couples who are each in a different stage of their respective relationships. Project, from Universal Media Studios, was created by writer/executive producers Jon Pollack (30 Rock) and Scott Silveri (Friends). (Variety)

Fringe co-creators Alex Kurtzman and Roberto Orci have signed a three-year overall deal with 20th Century Fox Television, which goes into effect on March 1st. Under the terms of the deal, Kurtzman and Orci will launch their own production shingle and begin developing series for the studio; while the duo will write, they will also work with other writers as well. "We looked at all the creative heroes that we've had: Steven Bochco, Shawn Ryan, Ryan Murphy," said Kurtzman. "That's the kind of brand-building we want to go for." (Hollywood Reporter, Variety)

CBS gave out two pilot orders yesterday, greenlighting cop drama Reagan's Law, described as a "multi-generational show revolving around a family of cops in New York." Project, from CBS Television Studios, hails from Mitchell Burgess and Robin Green (The Sopranos), who will executive produce with Leonard Goldberg. The Eye also ordered a pilot for an untitled medical drama from writer Hannah Shakespeare (The Philanthropist), executive producer John Wells, and Warner Bros. Television, about a team of traveling doctors who make stops across the US to help low income people. (Hollywood Reporter)

ABC has ordered a pilot for single-camera comedy It Takes a Village, about the unconventional family formed by two ex-spouses and their new significant others as raise their 15-year-old son. Project, from ABC Studios, is written by Casey Johnson and David Windsor (Greek) and executive produced by Mark Gordon, Deborah Spera, and Andrea Shay. (Hollywood Reporter)

Entertainment Weekly's Michael Ausiello is reporting that Michael will get a new love interest on The Office this season. "Michael is going to meet someone," showrunner Paul Lieberstein told Ausiello. "It’s one of these set-ups where a bunch of people go out and you don’t know you’re being set up... he kind of flips out and goes into 'date mode.' And it goes in a weird direction from there." Casting for the role has yet to get underway but the character is expected to appear in March or April. (Entertainment Weekly's Ausiello Files)

HBO is developing a biopic based on the life of ex-beauty queen and anti-gay activist Anita Bryant, with Chad Hodge (Runaway) attached to write and Darren Star (Sex and the City) attached to direct the telepic. (Hollywood Reporter)

NBC has announced that it will air the two-hour backdoor pilot for Canadian co-produced drama Secrets of the Mountain (also known as The Mountain) on April 16th at 8 pm ET/PT. (Futon Critic)

Spike has ordered six episodes of reality series Half Pint Brawlers, which will "examine the world of little-person wrestling and its increasing popularity as an underground sport." Series, from The Idea Factory and Lumberjack Crew, is set to launch in June as part of a programming block with the ten-episode Scrappers, in which "participants search for scrap metal and other trash that can be converted into cash." (Variety)