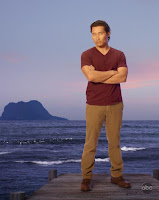 Daniel Dae Kim won't be leaving the island. Or, Hawaii, rather. The Lost star has landed a lead role in CBS drama pilot Hawaii Five-0, where he will play Detective Chin Ho Kelly. Kim's co-star, however, is still unknown. Reports have indicated that former Moonlight star Alex O'Loughlin had been offered the role of Detective Steve McGarrett, but no deal has been reached yet for him to star in the remake project, which hails from executive producers Alex Kurtzman, Roberto Orci, and Peter Lenkov. (Hollywood Reporter)

FlashForward co-creator David S. Goyer is leaving the ABC drama series, where he has served as showrunner since taking the creative reins from Mark Guggenheim in October. No replacement has been named for Goyer on the series, which still has roughly five more episodes to produce for this season's 23-episode order. Goyer, meanwhile, will segue back into film but will retain his executive producer credit on FlashForward. "As my feature projects have started ramping up again, I felt I was being pulled in too many directions," said Goyer in a statement. "I'm proud of the show and excited about the relaunch. It's in great hands." [Editor: just whose hands remain unknown at press time.] FlashForward returns with new episodes on March 18th. (Hollywood Reporter, Variety)

Entertainment Weekly's Michael Ausiello is reporting that Friday Night Lights star Zach Gilford has been cast in ABC drama pilot Matadors, citing unnamed sources. Gilford will play Alex Galloway, half of a star-crossed pair of lovers whose families work respectively in the Chicago D.A.'s office and in a high-powered law firm and often find each other on opposing sides of the courtroom. (Entertainment Weekly's Ausiello Files)

Michael Chiklis (The Shield) has been cast in ABC drama pilot No Ordinary Family, where he will also serve as co-executive producer following the closing of a development deal at the studio. Chiklis will play the patriach of a family that discovers they have super-powers. Dave Semel will direct and executive produce the ABC Studios-produced pilot alongside Greg Berlanti and Jon Harmon Feldman. (Variety)

In other pilot casting news: Jason Ritter (The Dry Land) has been cast as the lead in NBC drama pilot The Event; Todd Williams (In Plain Sight) has joined the cast of FOX drama pilot Ridealong, where he will play a beat cop who is addicted to the adrenaline rush his job provides; and Aisha Hinds (True Blood) has been cast in ABC drama pilot 187 Detroit as an "overworked and underpaid lieutenant." (Hollywood Reporter)

Confirmed: Neil Gaiman is set to write an episode of Doctor Who to air in 2011 as part of the series's sixth season. (Televisionary)

Henry Winkler will recur on the second season of USA's dramedy Royal Pains, where he will play Eddie Larson, the absentee father of Mark Feuerstein and Paulo Costanzo's Hank and Evan, who heads out to the Hamptons to make up for lost time. Season Two of Royal Pains, which was increased to 18 installments, is set to air this summer. (Variety, Entertainment Weekly's Ausiello Files)

Enrique Murciano (Without a Trace) has been cast in Shonda Rhimes' ABC drama pilot Off the Map. He'll play a former plastic surgeon who takes a job at a remote tropical clinic overseen by Martin Henderson's character. (Hollywood Reporter)

Could this be the final season of Law & Order: Special Victims Unit for Christopher Meloni? According to remarks the actor made to Courier & Mail, it seems as though Meloni could be leaving the series to focus on theatre and film projects. "I think 12 years is enough, a good number," he said. "The writers will have fertile ground to figure out how to arc [Elliot Stabler] out to another place—whether it's this world or the next." (E! Online's Watch with Kristin)

A&E has passed on drama pilot The Quickening, which starred Radha Mitchell as a bi-polar police detective. Move leaves drama Sugarloaf as the only pilot currently in contention for a series order at the cabler. A decision about whether it will go ahead will be made before the end of the month. (Hollywood Reporter)

Entertainment Weekly's Michael Ausiello has details about Andy and Erin's upcoming courtship on NBC's The Office. "It’s been a slow process of Andy gaining the courage to ask her out, but he finally does," showrunner Paul Lieberstein told Ausiello. "The wrinkle in their first date is she gets sick [with the flu], but they attempt to push on anyway." (Entertainment Weekly's Ausiello Files)

Mathew Horne (Gavin and Stacey), Marc Warren (Hustle), Mark Gatiss (The League Of Gentlemen), and Douglas Booth will star in BBC Two drama Worried About The Boy, about "a young Boy George and his journey to become a star on the Eighties fashion and pop music scene." Project is written by Tony Basgallop (Hotel Babylon) and directed by Julian Jarrold (Brideshead Revisited). (BBC)

TVGuide.com's Adam Bryant has an interview with Castle star Stana Katic about the recent storyline involving the murder of Kate Beckett's murder. "It was really a smart way to drop more information but not fully resolving it," Katic told Bryant. "I think it is going to be a driving force as we continue to move on. They'll definitely be dealing with it — probably not in the next couple of episodes. But I'm sure before the season's end, we'll get another big bombshell regarding that story line." (TVGuide.com)

Warner Bros. Television Worldwide Publicity SVP Sharan Magnuson will exit her position due to medical issues. "(Sharan's) leadership, talents and relationships working with creative talent, executives and the press are matched only by her character, selflessness and extraordinary work ethic," said Warner Bros. TV president Peter Roth. "She will be sorely missed by us all." (Variety)