UK Cinemas to Get 3-D "Doctor Who" Trailer 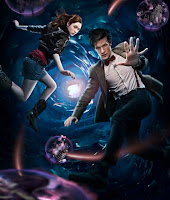 Broadcast's Will Strauss is reporting that UK cinemas will show a special 3-D trailer for Season Five of Doctor Who, which features new series leads Matt Smith and Karen Gillan... as well as new head writer/executive producer Steven Moffat.

The 40-second trailer, which will be converted to 3-D from 2-D, will mirror a new Doctor Who promo spot set to run this weekend on BBC One (and which will be made available Stateside by BBC America). It's expected to begin running in cinemas across the United Kingdom (as well as "external promotional screening events") in March.

"Doctor Who is the appropriate vehicle for 3D," said a BBC spokesperson in a statement. "It just fits. It’s a great way to introduce and showcase the new Doctor to younger viewers."