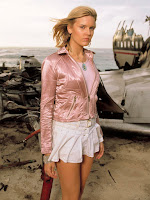 SPOILER! Entertainment Weekly's Jeff Jensen and Dan Snierson are reporting that Maggie Grace is set to reprise her role as Shannon Rutherford on ABC's Lost later this season in an unspecified number of episodes. "We’re really excited about having her back on the show," showrunner/executive producer Carlton Cuse told EW.com, "and we have a good story for her." Grace joins fellow former cast members Ian Somerhalder, Harold Perrineau, Cynthia Watros, and Rebecca Mader, all of whom are set to return to Lost this season. Sadly, Malcolm David Kelley will be the only original cast member not returning. [Editor: Grace has been the center of several conflicting reports about her possible return or non-return, so this confirmation should finally put those to bed.] (Entertainment Weekly's PopWatch)

Looks like Nine Lives found another one. The twelve-hour mini-series from executive producer Steven Spielberg and writer Les Bohem had been set up at Syfy back in 2007 but has now found another shot at NBC, where it will be rewritten as a direct-to-series project. Nine Lives, which will be executive produced by Spielberg, Bohem, Justin Falvey, and Darryl Frank, follows "a group of people who find a way to reunite with their loved ones in the afterlife through near-death experiences, but those journeys unleash an evil force." Could NBC be viewing this as a possible replacement for Heroes? Hmmm... (Hollywood Reporter)

Bad news for Better Off Ted fans: there's another nail in the series' potential coffin as series lead Jay Harrington has signed on to topline NBC comedy pilot Nathan vs. Nurture. Harrington will play the titular character, a heart surgeon who uncovers his biological parents and a group of low-aiming siblings. Project, from Sony Pictures Television, is written and executive produced by David Guarascio and Moses Port and directed by James Burrows. Harrington's casting is said to be in second position to Better Off Ted, but it's sadly thought unlikely that the ABC workplace comedy series will be renewed for a third season. (Variety)

The CW has ordered a pilot presentation for action-adventure drama Nomads from writer/director Ken Sanzel (NUMB3RS) and executive producers Ridley and Tony Scott. Project, which will be jointly produced by CBS Television Studios and Warner Bros. Television, follows "a group of young backpackers who find a way to make some extra money by doing secret missions for the C.I.A." (Variety)

NBC has ordered single-camera romantic comedy pilot Friends with Benefits, which had previously been set up at ABC. Project, from 20th Century Fox Television, (500) Days of Summer writers Scott Neustadter and Michael Weber, and Wedding Crashers director David Dobkins, revolves around five friends in search of love who settle for friendships with benefits. (Variety)

Pilot casting round-up: Ben Rappaport has been cast as the lead on the NBC comedy pilot Outsourced; Donald Faison (Scrubs) has come on board CBS comedy pilot The Odds, where he will play a lead homicide detective; Autumn Reeser (Entourage) has joined the cast of ABC superhero drama pilot No Ordinary Family, where she will play a lab assistant; Todd Stashwick (The Riches) has been cast in ABC's untitled Dana Gould comedy, where he'll play a "former college football superstar now married with four kids and down on his luck"; and Natalie Martinez (Sons of Tucson) has joined the cast of ABC drama pilot 187 Detroit. (Hollywood Reporter)

Courtney Thorne-Smith has been cast in a multiple-episode story arc on CBS comedy Two and a Half Men. She'll play Lindsay, described as "a girlfriend for Alan (Jon Cryer) who is a deeply neurotic, recently divorced mother of a rotten 16-year-old boy." (Hollywood Reporter)

While Top Gear isn't heading to NBC, it could still be headed for US screens... on the History channel. History is said to be in talks to acquire the US format for the hit British series, according to The Hollywood Reporter's James Hibberd. (Hollywood Reporter)

Spike has ordered a pilot for single-camera comedy Back Nine, which will star John Schneider (Smallville) as a former U.S. Open champion who has hit rock bottom and "travels the country competing in small-time tournaments with Tiger, his sex-addicted longtime caddy, in order to qualify again for the PGA Tour." Project is written and directed by Jason Filardi and Mark Perez, who will executive produce with John Lynch. Miguel Nunez is currently in talks to come on board in the role of Tiger. (Hollywood Reporter)

UK viewers will be able to finally see the Nathan Fillion-led ABC crime dramedy Castle, thanks to a deal between ABC Studios and UKTV crime channel Alibi, which has picked up the exclusive UK rights for the first two seasons of Castle. (Broadcast)

The CW is developing two reality projects, including an untitled docusoap from Ryan Seacrest Prods. that will follow celebrity trainer Tracy Anderson as she keeps celebrities fit. [Editor: While Anderson's client roster includes Jennifer Aniston, Gwyneth Paltrow, Kate Hudson, and Courteney Cox, I'd be amazed if any of them opts to appear on screen.] Also in development: Lost Weekend, a scavenger hunt-style competition series from executive producers Brett Ratner and Justin Hochberg. (Hollywood Reporter)

Cable network TLC has reached an undisclosed settlement with Jon Gosselin for the breach of contract lawsuit they had brought against the former Jon & Kate Plus 8 star. (Gosselin later countersued the network.) The terms of the settlement are being kept confidential. (Variety)

Nickelodeon has ordered a second season of kid-focused game show BrainSurge, with 40 episodes on tap for this summer. (Variety)

More layoffs at Sony Pictures Television in the current department: VP Debra Curtis and manager Rose Lee have been let go as part of a corporate restructure under which 450 employees will be let go from across all of Sony Pictures Entertainment divisions. (The sole remaining current executive? John Westphal.) Many are taking the layoffs as a sign that the studio will shift current responsibilities to the development teams. (Hollywood Reporter)

The Daily Show's Stewart Bailey has been named the new executive producer of NBC's latenight talk show Last Call With Carson Daly. He replaces David Friedman, who has left to take a position with CBS' The Early Show. (Variety)

Warner Horizon has signed a deal with John De Mol's Talpa Media to develop reality series for US broadcast and cable networks that are based on the shingle's Dutch formats. (Hollywood Reporter)

Hadley said…
Great news about Maggie Grace! I thought it was strange that she would be the only original cast member not returning (aside from Walt). I'm assuming she'll be in the parallel world storyline. Can't wait to see what Shannon is up to!
2/18/2010

MyTBoosh said…
I guess Better Off Ted really is dead. (Unless this is just one of Veridian Dynamic's cruel tricks.)
2/18/2010

The CineManiac said…
"with Tiger, his sex-addicted longtime caddy, in order to qualify again for the PGA Tour." - Wow they're really gonna go there.
2/18/2010