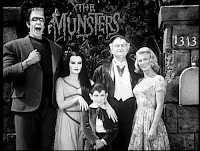 File this under: oh my god. Entertainment Weekly's Michael Ausiello and Andy Patrick are reporting that Pushing Daisies creator Bryan Fuller is developing an update of--wait for it--The Munsters. NBC has ordered a pilot for the project, which is being described as "Modern Family meets True Blood." If that wasn't enough to whet your appetite, Ausiello and Patrick also report that Guillermo del Toro (Hellboy) might executive produce as well. Jaw officially on the floor... (Entertainment Weekly's Ausiello Files)

E! Online's Kristin Dos Santos talks to Undercovers executive producer J.J. Abrams about the NBC espionage drama and about several topics on everyone's minds: namely that rumored Alias reboot and the Terry O'Quinn/Michael Emerson NBC drama pilot. News of a potential Alias reboot were news to Abrams, despite unnamed sources at the network telling Dos Santos that they're still considering rebooting the franchise. "I know there were some discussions about that early on," Abrams told E! Online. "But it was internal Disney discussions, not discussions with me. So I'm not sure what they're thinking now. At the moment obviously they have True Lies, which I'm sure is going to fill their need for a spy series, and we're obviously very busy at Bad Robot [J.J.'s production company]. So the idea of even discussing it is going to be very delayed for a while. But it's not only up to me; if they wanted to redo it, they could do it with or without me. It's not really my decision." (E! Online's Watch with Kristin)

Metro's Tom Phillips has an interview with Doctor Who star Matt Smith about this year's Christmas special, written by head writer/executive producer Steven Moffat. "We've got Michael Gambon playing a Scrooge-like miser with a time travelling twist – and I think it’s really, really good," said Smith. "It’s particularly Christmassy, lots of snow and lots of twinkly lights. I think it’s full of the right heart and soul for the season. Steven has, once again, written something brilliant." Smith also discusses the Neil Gaiman episode of Who, set to air next season, which he describes as "a real cracker – I think it’s going to be a real one for the Who fans, I think they’re going to love it." (Metro)

Entertainment Weekly's Michael Ausiello has a first look at the Cylon Centurions heading to Syfy's Caprica, which returns for the back half of its first season next week. “Daniel Graystone’s creation—the early-model Cylon known as the U-87—emerges as a critical story point,” executive producer David Eick told Ausiello. “Due to the bad PR Daniel has endured since his prized creation, the Holoband, [was blamed for] the emergence of terrorist cells on Caprica, Daniel shifts his company’s focus to the perfection of artificial intelligence and its proliferation throughout the culture as the ultimate `helper’: Never gets tired. Never asks for a raise. Never quits on the job... Meanwhile, Joseph Adama and his brother Sam—using their organized-crime muscle to seize control of Daniel’s company—see an altogether different purpose for the U-87s: to sell to the highest bidder, no matter how violent their agenda might be." (Entertainment Weekly's Ausiello Files)

Deadline's Nellie Andreeva is reporting that Shelley Conn (Charlie and the Chocolate Factory) has been cast as the female lead in FOX's upcoming prehistoric/futuristic adventure series Terra Nova, which will get a sneak peek in May before launching in Fall 2011. Conn will star opposite Jason O'Mara and Stephen Lang and will play Elizabeth Shannon, the wife of O'Mara's character, who travels back 85 million years. (Deadline)

Despite being cancelled earlier this week, FOX's Lone Star's second episode will still get its encore broadcast this Saturday, according to The Futon Critic. (Futon Critic)

NBC has ordered a pilot (with a penalty attached) for a Jack Black-executive produced comedy based on AJ Jacob's book "The Guinea Pig Diaries: My Life as an Experiment." Project, from Reveille and Sony Pictures Television, will revolve around "a man fixated on self-improvement who takes on difficult experiments and lifestyles, all of which makes things tough on his family." Josh Goldsmith and Cathy Yuspa are attached as writers. (Hollywood Reporter)

Elsewhere at the Peacock, NBC is said to be adapting British reality series The Boss Is Coming to Dinner, from Zodiak USA. Project, from executive producers Grant Mansfield, Natalka Znack, and Claire O'Donohue, revolves around "a group of job applicants who must invite their prospective employer to their home and throw a dinner party. After the boss meets with the candidates, he or she makes a final hiring decision." (Variety)

The Hollywood Reporter's James Hibberd is reporting that Anderson Cooper is in talks with Telepictures Productions and Warner Bros. Domestic Television Distribution to host a syndicated daytime talk show. "The talk show deal is complex because its being coordinated between Warner Bros., Cooper and Cooper's employers at CNN -- who have an exclusive contract with the newsman," writes Hibberd. "The deal, which has been in talks for more than a month and may close by the end of the week, calls for Cooper to continue hosting 360. With a lot of moving parts at play, however, sources caution the deal is not yet a sure thing." (Hollywood Reporter's The Live Feed)

Deadline's Nellie Andreeva is reporting that FOX is considering ordering Lawyers for Less, described as "a light legal drama franchise" from creator/star Danny Comden and Sony Pictures Television that will be executive produced and directed by Joe and Anthony Russo. Project, written by Comden and Josh Pate, is said to be "a workplace comedic drama about two best friends - a white-shoe lawyer (Comden) coming back from disbarment for mixing business and pleasure and an enterprising black lawyer who takes him in as partner - who run a small storefront law firm specializing in ambulance chasing and defending the defenseless." (Deadline)

CSI creator Anthony Zuiker will bring the villain from his "Level 26" novel series--Sqweegel, described as a "forensic proof" serial killer--into an episode of CSI set to air on October 14th. He'll be played by Daniel Browning Smith, the world's most flexible man. (Variety)

Nickelodeon has ordered 26 episodes of live-action comedy Supah Ninjas from executive producer Brian Robbins. Series, which stars Ryan Potter, revolves around "a high schooler who discovers that he actually descends from a line of ninjas" and "forms a secret team of ninja crime fighters -- the 'Supah Ninjas' -- with his friends (Carlos Knight and Gracie Dzienny)." (Variety)

David said…
An Alias reboot, huh? I LOVED that show...but would this reboot be a reDO? Or just keepin the story going? New characters? Different cast entirely?
9/30/2010