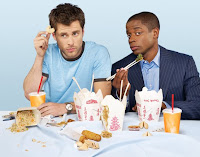 I'm not even a Psych fan and this made me blissfully happy. Entertainment Weekly's Michael Ausiello is reporting that USA's Psych is staging a Twin Peaks-inspired episode that will also feature original cast members Sheryl Lee, Sherilyn Fenn, Dana Ashbrook, Catherine Coulson, Ray Wise, Lenny Von Dohlen, and Robyn Lively. Um, yes please. The episode, co-written by series star James Roday, will air sometime this fall and will revolve around "a quirky Northern California town that has been rocked by the death of a high school student." Sound familiar? Coulson will even play a "mysterious Woman with Wood," a tongue-in-cheek take on her Log Lady from Twin Peaks. Sign me up. (Entertainment Weekly's Ausiello Files)

Deadline's Nellie Andreeva is reporting that HBO has given a pilot order to an untitled comedy written/directed by 24-year-old Lena Dunham (Tiny Furniture) and executive produced by Judd Apatow and Jenni Konner. Project, which will also star Dunham, revolves around "the assorted humiliations and rare triumphs of a group of girls in their early 20's" and will feature autobiographical elements from Dunham's own life. (Deadline)

[Editor: Will Forte, as widely reported, will not be returning to SNL this season. Jenny Slate, who made headlines for the F-bomb heard 'round the latenight world, is also "not expected to return," according to Variety's Michael Schneider.]

TV Guide Magazine's Will Keck is reporting that Celia Weston (Desperate Housewives) has beat out Delta Burke, Dianne Wiest, and Kathy Bates (along with others) to play Barb Tucker, the mother of Emmy Award winner Eric Stonestreet's Cam, on ABC's Modern Family. Weston is expected to turn up around the holidays for a visit this season. (TV Guide Magazine)

Entertainment Weekly's Michael Ausiello is reporting that Alan Ritchson will reprise his role as Arthur "AC" Curry on the final season of the CW's Smallville during November sweeps. "AC was last seen in season 8, when his secret identity was discovered by LuthorCorp," writes Ausiello. "I’m told the Justice Leaguer will resurface in this season’s ninth episode." (Entertainment Weekly's Ausiello Files)

MTV is getting back into the live daytime game with new daily countdown show The Seven, according to The Hollywood Reporter's James Hibberd, who reports that the show, which will launch September 27th, "presents seven stories that MTV viewers need to know, from Hollywood news, music, sex and fashion to other topics." Project, which will also feature interviews and musical performances, will be executive produced by Steve Tseckares. (Hollywood Reporter)

David Nevins has announced his first piece of development business since he took over as president of Showtime. The project in question is an adaptation of Tom Perrotta's novel "The Wishbones," which Perrotta himself will adapt for the pay cabler. Warner Bros. Television-based project, which will be executive produced by Perrotta and John Wells, revolves around a small-time wedding band with plans of rock n' roll stardom. Wells is no stranger to Showtime: his next series, a US adaptation of UK drama Shameless, is set to launch early next year on the channel. [Editor: Having seen the pilot for the US Shameless--twice, no less--and been raving about it for months since, this is one to keep an eye on.] (Variety)

Don't look for Marc Cherry to pull out the stops this sweeps on ABC's Desperate Housewives. Cherry told TV Guide Magazine's Will Keck that the soap will get back to basics this season and ditch the gimmicks. "I'm not doing another big gimmicky natural disaster this year; I'm trying something different," Cherry said. "My big cliffhanger right before we take our Christmas break will have to do with Paul Young. He has a plan for destroying the neighborhood. There will a shocking cliffhanger that effects everyone's lives, and then right before February sweeps, we're going to kill off one of our characters." (TV Guide Magazine)

HBO has acquired rights to Martin Scorsese's documentary Public Speaking, which focuses on writer Fran Lebowitz and which will air on the pay cabler in November. (via press release)

Entertainment Weekly's Michael Ausiello is reporting that FOX's Bones will feature an episode that's loosely inspired by dance competition series So You Think You Can Dance, as Booth and Brennan tackle a case involving street performers. Episode will feature a guest appearance from So You Think You Can Dance Season Four runner-up Stephen "tWitch" Boss, who will play a murder suspect. (Entertainment Weekly's Ausiello Files)

Despite the rumors swirling that Simon Cowell will step down from the UK X-Factor in order to focus his attention on the upcoming US launch of the format, his reps have told The Hollywood Reporter that "no decision has been made." (Hollywood Reporter)

AskRachel said…
I don't watch Psych either but I will definitely be tuning in for the Twin Peaks episode!
9/08/2010