Dogged Detectives with Bite: An Advance Review of FX's Terriers 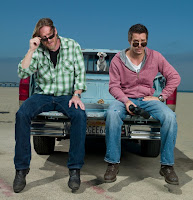 As the owner of a small dog, I can attest to the fact that the size of the beast isn't indicative of the largeness of their personalities... nor the fact that they're only too willing to take on adversaries far bigger than them.

Which seems to be the metaphor behind the title of FX's new drama series Terriers, which premieres tonight. Despite the title, Terriers isn't about dog breeders or, well, dogs at all, though there are more than a few canines lurking in the background of this scrappy and sly series, created by Ted Griffin (Ocean's Eleven, Matchstick Men) and executive produced by Shawn Ryan (The Shield).

While the unlicensed private detectives of the series, ex-cop Hank Dolworth (Life's Donal Logue) and his BFF Britt Pollack (True Blood's Michael Raymond-James), might be small fry in the sunny San Diego coastal town of Ocean Beach, they're not ones to back down from anything, even when they've bitten off far more than they can chew.

For this winsome duo, their low-level business isn't a lucrative line of work but rather an effort to remain a little longer in Neverland, despite the efforts of everyone in their lives--whether that be Hank's ex-wife Gretchen (House's Kimberly Quinn), now moving on with her life, or Britt's would-be veterinarian girlfriend Katie (Dirt's Laura Allen)--to push them, kicking and screaming, into adulthood.

Despite the fact that Hank and Britt are slumming it a bit, it's a joy to chew the fat with them in the gutter. In the hands of Logue and Raymond-James, there's a genuine camaraderie and rapport between these two and it's hard to imagine that they've been anything but the best of friends for years now. They have a shorthand between them for their professional maneuvers--which often include the illicit, immoral, and outright illegal--and, like any friends of the male variety, seem hellbent on driving each other crazy. (In the pilot episode, this includes Hank's repeated attempts to create an earworm--a song that gets stuck in one's head--to torment Britt.)

But this isn't a USA dramedy. While there's a hell of a lot of comedy going on here, it's nicely juxtaposed against some toothy drama that exposes the seedy underbelly of this sunny beach town. It's not all suntanning and beers on the ocean. A rotting corpse is discovered in a lifeguard tower. A real estate developer is as dirty as they come. A parking lot confrontation--over a missing girl under Hank and Britt's protection--turns brutally nasty. Underneath the crisp air and rays of sunshine lurks a violence that's always threatening to erupt and overtake the status quo.

And Hank, we learn over the course of the first few episodes, was dishonorably discharged from the local police department thanks to his alcoholism. Now clean and sober, he's lost everything--his job, his house, and his wife--to his addiction, but he's maintained a contentious relationship with his ex-partner Mark Gustafson, played here to delicious perfection by Rockmond Dunbar (Prison Break). But Britt is no angel, either, as we learn in a later episode. How the two met is only too fitting, really.

(Points too for Jamie Denbo's hilarious and super-pregnant lawyer Maggie Lefferts, here presented as a cross between the guys' confessor, mother, and manager. Denbo--half of Ronna and Beverly--shines in her scenes and I only hope we see more of her in the back half of the season.)

It's also worth noting that this isn't a crime procedural, but rather a gripping and taut serialized drama. Each episode builds on the one that preceded it and gracefully unfolds the further development of the characters while also broadening out the world. Throughout it all, the case in the pilot--the one involving the aforementioned real estate developer--hovers uneasily over the action as Hank and Britt find themselves drawn deeper and deeper into a scandal that puts their lives--and those of their loved ones--in serious risk.

Will the guys throw in the figurative towel? Or will they doggedly pursue the truth about just what is going on at the Montague development, even as all number of obstacles are thrown up in their way? (You can guess which way the wind blows.)

Thanks to the crack writing staff of Terriers, what develops is a smart, funny, and compelling series that masterfully balances light and dark, humor and drama, pain and catharsis. The five episodes that I screened earlier this month point towards Terriers being an accomplished and gutsy series that's unlike anything else on television. While the fall season has only gotten under way today, it's safe to say that Terriers is already high atop the list of the very best new series on television right now.

This dog's bite is just as fierce as its bark.

foreign exchange said…
I discovered this through this site and im in love.
9/17/2010