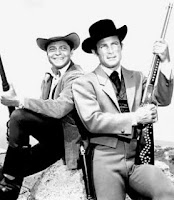 Hold on to your (ten-gallon) hats: Entertainment Weekly's Michael Ausiello is reporting that Battlestar Galactica's Ronald D. Moore is said to be developing a remake of The Wild, Wild West, which ran for four seasons in the mid-1960s and starred Robert Conrad and Ross Martin. Project is still in the very early stages, which means not only is there no network attached but Moore has yet to take the project out to networks. (Entertainment Weekly's Ausiello Files)

Chris Mundy has left CBS' midseason Criminal Minds spinoff, Criminal Minds: Suspect Behavior and will be replaced by Ed Bernero, who will now oversee both the flagship and spinoff series as showrunner, though he'll lean a little more heavily on Simon Mirren and Erica Messer, who will gain some oversight on Criminal Minds. Mundy's departure from the series was said to be due to the studio deciding that "the spin-off needed more direction from Bernero, who helped turn Criminal Minds into a solid hit for CBS," according to Variety's Michael Schneider. (Variety)

Vulture's Josef Adalian is reporting that MTV is resurrected hidden camera prank show Punk'd, but is close to signing a deal to replace Ashton Kutcher with baby-faced pop idol Justin Bieber as the host. (Kutcher will remain the series' executive producer.) "If Kutcher's past history with Punk'd is any indication, Bieber will likely appear in a few early episodes as a participant in the pranks, then gradually revert to mostly introducing segments," writes Adalian. (Vulture)

Entertainment Weekly's Michael Ausiello is reporting that Robert Patrick (Terminator) has been cast in a multiple-episode story arc on HBO's Big Love, which returns for its fifth season early next year. Patrick is set to play Bud Mayberry, described as "the leader of polygamist fringe group." The casting of Robert Patrick comes after producers have also secured the services of ex-24 co-star Gregory Itzin, who will play the Republican Leader of the Utah State Senate. (Entertainment Weekly's Ausiello Files)

Stephen Mangan (Green Wing) has been cast as the title character in BBC Four's adaptation of Douglas Adams' "Dirk Gently's Holistic Detective Agency," where he will star opposite Darren Boyd, Helen Baxendale, and Howard Overman. Here's how Auntie is positioning the series: "Anti-hero Dirk Gently operates his eponymous detective agency based on the fundamental interconnectedness of all things. Perpetually broke, hopelessly chaotic and utterly infuriating, most people suspect Dirk is nothing more than a cheap conman. And they might be right – but nevertheless his methods, though unusual, do often produce surprising results. When Dirk sets out to solve an apparently simple and harmless disappearance of a cat from an old lady's house, he unwittingly uncovers a double murder which, in turn, leads to a host of even more extraordinary events." Project is expected to air either at the end of the year or in early 2011. (BBC)

Entertainment Weekly's Michael Ausiello is reporting that Drea de Matteo has been cast in a potentially recurring role on FOX's Running Wilde, where she will play Didi, the step-mother of Will Arnett's Steve Wilde. "Didi comes to the Wilde estate on behalf of Steve’s never-before-seen dad to rein in his monetary expenditures—on the same day Steve decides to fund Emmy’s (Keri Russell) nonprofit organization," writes Ausiello, who notes that de Matteo's episode is slated to air next month. (Entertainment Weekly's Ausiello Files)

Was anyone still clamoring for a television version of Hitch? Well, you're getting one. FOX has given a script commitment plus penalty to an one-hour version of Will Smith's date doctor that will be written by Pete Chiarelli and executive producers Smith and James Lassiter. (Deadline)

Morgan Fairchild is set to make a return to NBC's Chuck, where she will reprise her role as Honey Woodcomb, the mother of Ryan McPartlin's Devon, as Ellie's pregnancy develops. "Mom does come back," McPartlin said on a press call. "It's funny, because Mom and Ellie have to learn how to deal with their new roles that each one is going to play as a mother and a grandmother. So that creates a bit of fun drama." Fairchild will make an appearance in the October 25th episode of Chuck, which also features Robert Englund and Linda Hamilton. (Zap2It)

Deadline's Nellie Andreeva is reporting that Scott Cohen (Gilmore Girls) has been cast opposite Callie Thorne in USA's drama pilot Necessary Roughness, where he will play "a 'fixer' for a football franchise who works closely with Danielle" (Thorne). Elswhere, Sara Rue (Less Than Perfect) has joined the cast of CBS' Rules of Engagement as surrogate Brenda, while Joan Collins (yes, THAT Joan Collins) will appear in a November sweeps episode as the mother of David Spade's character. (Deadline)

Aquaman (Alan Ritchson) will make his return to the CW's Smallville later this season, and he's bringing a wife in the form of Mera, played by Elena Satine (Melrose Place), according to Entertainment Weekly's Michael Ausiello. The duo are set to turn up in the final season's ninth episode, which is directed by series lead Tom Welling. (Entertainment Weekly's Ausiello Files)

No Tough Trade for Epix, after all. The pay cabler has pulled the plug on its Nashville-set drama project, Tough Trade, the high-profile Lionsgate TV pilot that starred Sam Shepard, Trace Adkins, Cary Elwes, Lucas Black, and Joey Lauren Adams. "It was a combination of running out of time and dealing with distractions, and at some point we had to make a decision whether it works or it doesn't," said Epix CEO Mark Greenberg. "At the end of day, it just didn’t work." Project, from executive producers Jenji Kohan, Sean and Bryan Furst, and director Gavin Hood, may be retooled as a mini-series, while Epix maintains that it is not getting out of the original series game. (Deadline)

Krista Allen (What About Brian) is seto to guest star on an upcoming episode of the CW's Life Unexpected, where she will play "a sizzling-hot multimillionaire named—wait for it—Candy who is being courted by Emma as a client," according to Entertainment Weekly's Michael Ausiello, and who will fall for Baze. (Entertainment Weekly's Ausiello Files)

Deadline's Nellie Andreeva is reporting that HBO is developing a single-camera comedy pilot based on Clint McCown's novel "The Member-Guest," that will be written by Steve Pink and executive produced by Kevin Bacon, who could also star in the project. Project revolves around "a burned-out golf pro of a 9-hole course who just wants one more shot at the tour" but whose "comeback is constantly sidelined as he deals with the needs of the members of the Middle-American country club who are grappling with dashed dreams of their own." (Deadline)

ABC has given a script order (plus penalty) to Awkward Family Photos, a comedy from Moses Port and David Guarascio based on the website of the same name. Elsewhere, NBC ordered family comedy script Man of the House from writer Adam Sztykiel and FOX ordered a script for cop drama Chameleon from Tom Fontana. (Variety, Deadline)

E! has ordered ten episodes of Kourtney and Kim Take New York, which is slated to launch in January on the cabler. (Variety)

par3182 said…
will running wilde still be around next month?

i love the awkward family photos website; i hope it translates to television better than a certain twitter feed
10/06/2010