The Daily Beast: "BBC Two’s The Great British Bake Off Is the Best Reality Show on TV" 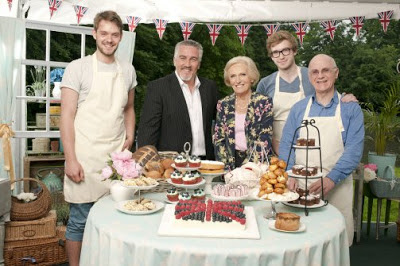 The Great British Bake Off is a comforting show about baking—and it makes for truly addictive TV. Ahead of Tuesday night’s season finale, I explore the show’s charms and what it can teach the recently lackluster Top Chef.

The best reality show on television this year doesn’t involve wannabe singers, “real” housewives, or Honey Boo Boo, but rather a bunch of Brits baking cakes in the countryside.

The insanely addictive culinary competition show The Great British Bake Off, which wraps up its third season tonight in the United Kingdom on BBC Two, isn’t remotely salacious or controversial, and that’s part of its inherent charm. (U.S. viewers, you can get your fix on YouTube for the time being.)

Bravo’s homegrown Top Chef could learn a thing or two from the runaway British television hit, which riveted 5.6 million viewers last week and grabbed a staggering 23.7 percent audience share, nearly trebling its audience from where it began in 2010. It also has been a critical triumph as well. Radio Times’s Jack Seale wrote of last week’s episode, “The French-themed semi-final was a tense affair, about as dramatic and unforgiving as telly can get while still being about cake. Hardcore patisserie.”

Pitting 12 home bakers against each other for the top prize by putting them through their paces with three challenges per week (a signature challenge, a technical challenge, and a showstopper), The Great British Bake Off shouldn’t be nearly as taut and stressful as it is. Yet there’s something intensely nerve-wracking about seeing a vicar’s wife attempt to make a beef Wellington ... and having the pastry casting slide off under the harsh heat of the oven, or a Fair Isle sweater-clad Scottish lad attempting to mix chilies and salt as a topping for a French macaron. And, yes, there is something hardcore about the challenges—produce 12 sweet and 12 savory bagels under pressure!—and the challengers themselves, ambitious amateurs with a breadth of skill and knowledge. They would put many of Top Chef’s or Sweet Genius’s professionals, some of whom seem more desperate for fame than to further their craft, to shame.

Unlike the show’s American culinary competition siblings, The Great British Bake Off, or GBBO for short, is cozy and comforting, the television equivalent of a steaming hot mug of cocoa. It doesn’t concern itself with mining drama out of the interpersonal relationships between the bakers. While Top Chef: Just Desserts tapped into the drama queen madness of its contestants (remember the “Red Hots are for my mommy” breakdown of one competitor?), The Great British Bake Off instead wisely keeps the focus on the baking itself. It helps that the contestants—from diverse backgrounds, ages, races, and genders—are genuinely supportive of each other in the kitchen. There are no verbal explosions, no thrown pots, no punched walls. The drama is left to the rising of a soufflé rather than that of tempers; disappointment is internalized rather than directed outward.