The Daily Beast: "Inside the High-End Fashion Sensibility on CBS’s The Good Wife" 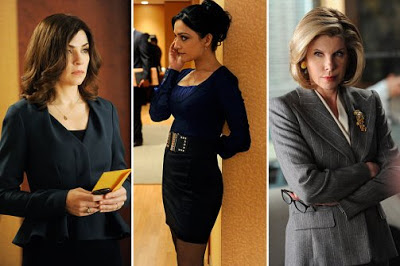 Over at The Daily Beast, you can read my latest feature, "Inside the High-End Fashion Sensibility on CBS’s The Good Wife," in which I talk to The Good Wife costume designer Daniel Lawson about all of the above and much more. If you've ever wanted to see me get technical with peplum jackets, this story is for you. (And the bonus gallery can be found here.)

Within the cavernous warehouse that is home to the costumes for CBS’s sophisticated legal drama The Good Wife, there are apparently 600 women’s suits at any given time, waiting to be worn by Juliana Margulies’s Alicia Florrick and Christine Baranski’s Diane Lockhart.

“I probably have in the vicinity of 300, 350 for Alicia, and probably 250 suits for Diane,” said the show’s Emmy Award-nominated costume designer, Daniel Lawson.

Given The Good Wife’s setting—the white shoe Chicago law firm Lockhart/Gardner—it’s to be expected that there would be quite a few designer suits on the racks for the two lawyer characters. But that astronomical number points to Lawson’s meticulousness and passion about the show’s strong use of fashion, which includes such notable labels as Proenza Schouler (embodied by a gorgeous jade green jacket worn by Margulies’s Alicia in the fourth season opener), Christian Dior, Vivienne Westwood, Akris, L.K. Bennett, Ralph Lauren, Ferragamo, and others.

Lawson, who previously worked on HBO’s Bored to Death and NBC’s Kings, came on board The Good Wife after the show’s pilot and has been responsible for defining the clear styles of all of the characters through some fashion-forward pieces, explosive bursts of color, and tight looks for each of the ensemble cast, from the slick tailoring on male characters like Matt Czuchry’s Cary Agos to the juxtaposition of leather and chiffon on Archie Panjabi’s legal investigator, Kalinda Sharma.

Inspiration can come from a walk around Manhattan, runway shows, fashion magazines (“I looked through a lot of law magazines, and that was a bit of a snooze,” said Lawson), or even Facebook profiles. He also looks to the show’s production designer, Steven Hendrickson, the creators—husband and wife team Robert and Michelle King—and the actors themselves for inspiration. “If what I’m doing isn’t supporting what they’re doing, it’s for naught,” Lawson said. The actors were excited to learn how far Lawson wanted to take the show aesthetically, he recalled. “All of the actors were pleasantly surprised that the show went to a slightly elevated level of reality as far as the fashion,” he said. “It’s kind of rare that a lawyer show has started to become known for its wardrobe.”

With so many costume changes per episode, the wardrobe for the show continues to expand exponentially. “I’m constantly buying more,” said Lawson. “That’s something that I think is good for the show. We do repeat pieces from time to time, but we also have a healthy influx of new things to keep it looking fresh. New, new, new.”