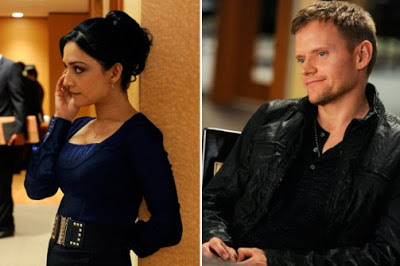 Has the legal drama’s steamy Kalinda/Nick plot gone too far? Maria Elena Fernandez and I debate the merits and flaws of this season’s most polarizing storyline on The Good Wife.

At The Daily Beast, you can read my latest feature, "The Good Wife: Has Season 4’s Kalinda Storyline Gone too Far?" in which Maria Elena Fernandez and I offer up a he said/she said-style discussion on the Kalinda/Nick storyline on Season 4 of The Good Wife.

Archie Panjabi’s Emmy-winning turn as Kalinda Sharma has been one of the highlights of CBS’ stellar legal drama, The Good Wife. But something happened on the way to fleshing out the fiercely independent investigator’s storyline—and not everyone is thrilled about it.

Entertainment Weekly’s TV critic Ken Tucker last week criticized the show’s handling of the twisted dynamic between Panjabi’s Kalinda and Marc Warren’s Nick. “The intrusion of Nick, Kalinda’s ex-husband and played by State of Play’s Marc Warren as though he’d wandered in from Trainspotting, has thrown off the balance of the storytelling in the new season’s first two episodes,” wrote Tucker, “… the bickering that followed, along with [Nick] hanging around the law firm to make Kalinda uncomfortable, only served to make the viewer uncomfortable.”

It’s a viewpoint echoed by The A.V. Club’s David Sims, who wrote, “The Good Wife’s writers seem to have introduced her nasty husband Nick just to see how much they can get away with on CBS. The whole thing certainly isn’t dramatically effective, and aside from how gross it can get, it’s not very gripping.”

The Daily Beast’s Jace Lacob and Maria Elena Fernandez are at odds about the storyline and teamed up to discuss the highs and lows of The Good Wife’s Kalinda/Nick plot so far. (WARNING: The conversation below contains plot points from the season’s third episode, “Two Girls, One Code.” If you have yet to watch that episode, read at your own peril.)

He Said: I am taken aback by some of the reactions to this season’s Kalinda storyline, which I’m finding to be really revealing and intriguing. Kalinda has always been a fairly enigmatic, dark character and Season 4 of The Good Wife has begun to strip away the armor she wears in order to reveal why she is so damaged. We’re not meant to like Nick or root for him, but I am utterly captivated by their screwed up dynamic.

She Said: We’ve waited a long time to learn more about Kalinda, why she created another identity, and why she likes to keep a mysterious quality. My main complaint is that there’s no payoff. I don’t buy their relationship or the predicament she finds herself in at all. It has not been set up for us. And while we are not supposed to root for Nick, we are supposed to root for Kalinda. I don’t. I don’t feel anything for her.

He Said: You really don’t feel anything for Kalinda? That surprises me, because I feel a great deal for her during this storyline. The way that she looks at her wrist after her rough sex with Nick speaks volumes about her past as an abused wife who was little more than a possession for her obsessed, Svengali-like husband. The fact that he has tracked her down to Chicago to (A) get her back and reclaim her, and (B) get back the money she stole from him while he was in prison speaks a lot about the relationship here, as does the great skillet scene from last night’s episode. Their struggle—his of proto-traditional husband/wife dominance and submission and hers of freedom and independence—are at cross-purposes. He wants to own her and Kalinda wants to remind him that she can’t be owned. That it plays out in such a domestic setting, in a kitchen and he demands that she make him an omelet, is telling as well. There is real darkness in him and within her: he’s the source of her angst and why she can’t get close to anybody.

She Said: First of all, there’s nothing traditional going on here. This is a completely sadomasochistic, sick relationship.

He Said: Yes, but I only meant traditional in the sense of patriarchy: he wants her to fall in line with his whims and appetites, whether it is public sexual contact or, well, eggs.