The Daily Beast: "17 Shows Worth Watching This Summer" 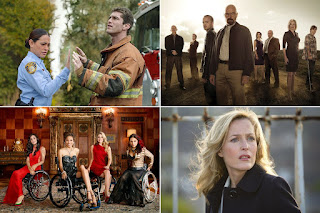 Get out of the sun—there’s recovering zombies, addictive serial-killer mysteries, and the Breaking Bad finale on TV. My take on what not to miss for this cool summer season.

At The Daily Beast, you can read my latest feature, "17 Shows Worth Watching This Summer," in which I round up 17 shows worth watching during the sweltering months to come, from FX's The Bridge and BBC America﻿'s Broadchurch﻿ to ABC Family﻿'s Switched at Birth﻿ and CBS﻿'s Under The Dome. (Plus, Showtime's Ray Donovan, which SHOULD NOT BE MISSED.)

Summer isn’t the television wasteland that it used to be. While the broadcasters are still figuring out what to do with their real estate during these lazy months (original drama? reality competitions? burn-offs?), cable channels have long known the power of airing high-profile series throughout the heat, and there is quite a lot of original programming to be seen during these next sweltering months.

CBS is launching the event series Under the Dome and attempting to tap into the runaway success of BBC’s The Great British Bake Off (which I reviewed here) with American remake The American Baking Competition. So You Think You Can Dance, The Bachelorette, Masterchef, and America’s Got Talent are all back on their respective networks’ schedules, while many of you will be too busy bingeing on the return of Arrested Development on Netflix to notice much else.

But as far as what shows you should be putting on your TiVo’s Season Pass, here are 17 new or notable returning shows—from the expected (Breaking Bad) and high-profile (FX’s The Bridge) to the more offbeat (Netflix’s The Fall and BBC America’s Broadchurch).