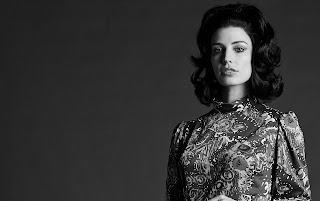 Is Mad Men’s Megan Draper about to be murdered à la Sharon Tate? Internet conspiracy theorists say yes. My take on the rumors and what the show’s costume designer has to say.

At The Daily Beast, you can read my latest feature, "Mad Men: The Bizarre Megan Draper as Sharon Tate Conspiracy Theory," in which I examine the current Internet conspiracy theories swirling around Mad Men's Megan Draper and see what the show's costume designer, Janie Bryant, had to say about the star t-shirt and more.

On AMC’s Mad Men this season, Megan Draper (Jessica Paré), the actress wife of Jon Hamm’s Don Draper, has had some success in her own career, landing a meaty role on an ongoing daily soap opera where she’s now playing twins Colette and Corinne.

In this week’s episode (“The Better Half”), Megan took to the balcony of the Manhattan apartment she shares with her adulterous husband. Nearby, Peggy (Elisabeth Moss) has accidentally stabbed her boyfriend, Abe (Charlie Hofheimer), thinking he was an intruder. As he’s rushed to the hospital, Megan contemplates her future and her marriage to Don as nearby ambulance sirens fill the air. Crime is on the rise and tensions throughout the city are flaring.

Dressed in a simple white t-shirt emblazoned with a red star, Megan in that moment deeply resembles Sharon Tate, the pregnant actress wife of director Roman Polanski, who was murdered in 1969 by followers of Charles Manson. In fact, Tate wore the same t-shirt as the one Megan is wearing in a 1967 Esquire magazine shoot. And thus, an Internet conspiracy theory was born.

This theory took hold earlier this week on Reddit and quickly filtered through the Internet as the week wore on. Over on UPROXX, Dustin Rowles has taken things even further, taking an even closer look at the Mad Men Season 6 poster, which he felt held some cryptic clues about Megan’s potential fate: