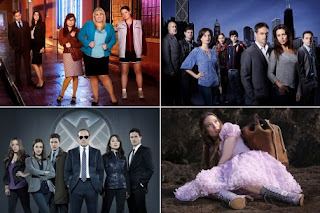 I examine ABC's primetime schedule for 2013-14, which includes Joss Whedon's Agents of S.H.I.E.L.D., a Once Upon a Time spin-off, and Kyle Killen's Mind Games. Plus, read what Paul Lee had to say about the cancellation of Happy Endings and why Agents of S.H.I.E.L.D. is perfect for Tuesdays at 8 p.m.

At The Daily Beast, you can read my latest upfronts update, "ABC Announces 2013-14 Schedule: Marvel's Agents of S.H.I.E.L.D. Gets Tuesday Berth, Super Fun Night Gets Modern Family Lead-In," in which I report on ABC's fall 2013 primetime schedule, sum up Paul Lee's remarks to reporters this morning, and issue some quick reactions to the scheduling announcements.

ABC took the wraps off of its 2013-14 schedule on Tuesday morning, following speculation about where the network would slot its highly anticipated television series spin-off of feature film franchise The Avengers, entitled Marvel's Agents of S.H.I.E.L.D. (Yes, there are a lot of periods there for one title.) Elsewhere, ABC announced that Rebel Wilson's sitcom Super Fun Night would get the plum post-Modern Family timeslot on Wednesdays and its upcoming spin-off of Sunday evening's successful fantasy drama Once Upon a Time, Once Upon a Time in Wonderland, would be heading to Thursdays. And comedy The Neighbors, which received an eleventh hour reprieve, is now headed to Fridays.

The biggest news, however, was that Dancing With the Stars would be reduced to just one night a week.

The announcements were made by ABC Entertainment Group President Paul Lee, ahead of Tuesday's official upfront presentation at Lincoln Center's Avery Fisher Hall. “We are taking some big swings with groundbreaking shows this season, and staying close to our roots with smart and sophisticated storytelling," said Lee in a statement. "ABC is known for its combination of innovation and stability, and our new schedule reflects that. We’re bringing back the shows that viewers have embraced and enhancing the lineup with a slate of exciting new series."

Among the new shows heading to ABC's lineup next season: Back in the Game, Betrayal, The Goldbergs, Killer Women, Lucky 7, Marvel’s Agents of S.H.I.E.L.D., Mind Games, Mixology, Once Upon a Time in Wonderland, Resurrection, Super Fun Night, Trophy Wife and new alternative series The Quest.

Speaking to the press ahead of Tuesday's upfront presentation, Lee said that he sees ABC as having a "smart, strong, sophisticated brand," and that the network is "starting to add some other pieces this year," including things like Marvel's Agents of S.H.I.E.L.D. "Our job is to be hugely inclusive. It’s a big, broad network that does overdeliver on upscale audiences… It's a smart, emotional brand."

As for the difficult decision behind cancelling comedy Happy Endings, one of Lee's personal favorites, Lee was honest about the challenges. "I do think Happy Endings is absolutely on brand… It was just too narrow. It was a very hard decision. I loved that show and found it hard to make that decision.”

Lee said that they are striving to bringing a lot of innovation to scheduling next season. "Originals are being run in batches of 12 [episodes] with a gap," explained Lee. Limited run series are being built to air in that gap in between clusters of original episodes. Reality entry The Quest will run between the two halves of Once Upon a Time.

In fact, ABC is looking to make "quality launches throughout the season away from the clutter of the fall. Resurrection is an extraordinary piece of filmmaking... I’ve left that to midseason so it could flourish away from that slugfest of September. Mind Games is also for midseason [and features] an extraordinary performance from Steve Zahn." The same will hold for Tricia Helfer-led Killer Women, a character-driven procedural that Lee described as "very romantic, very tough, irresistible."

As for the other limited run series that will bridge the halves of ABC's original dramas, Lee wouldn't comment beyond Betrayal and Resurrection (and reality entry The Quest) for now: "We’ll be announcing them a little later."

Midseason will also see the return of Suburgatory and the launch of new comedy Mixology. Lee touted the latter, which is set at a Manhattan bar: "The whole season takes place in one night. We won’t know who goes home with whom until the end of the season."