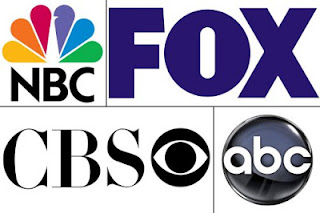 Is your favorite show safe? I take a look at what’s on tap for the broadcast networks for the 2013-14 season, which shows are coming back, and which ones have gotten the axe.

At The Daily Beast, you can read my latest feature,
"TV Upfronts 2013: NBC, ABC, CBS, Fox, and The CW By the Numbers," in which I offer a running total (which will be updated throughout the next week) at all the broadcast network shows that have been renewed, ordered, and cancelled as we move into upfront presentations week for the broadcast networks.

Every May, advertisers and members of the press descend on New York City as the broadcast networks host their annual upfront presentations, where they will unveil their fall schedules, trot out talent, and announce which shows will be coming back next season and which ones won’t.

The Daily Beast will be reporting on every move being made by ABC, CBS, Fox, NBC, and The CW as they prepare to launch their 2013-2014 schedules. As the week wears on, The Daily Beast will continue to update its gallery of new shows as the individual networks present their schedules and programming and report on what the networks’ top executives are saying.

This year’s crop of pilots was heavy on literary adaptations, period dramas, foreign formats (particularly of British, Spanish, and Israeli series), and remakes of movies (About a Boy! Beverly Hills Cop! Bad Teacher!) and old television shows (Ironside! The Tomorrow People!). Plus, there was not one, but two takes on Alice in Wonderland, proving that fairy tales are again a hot commodity this year. Will Joss Whedon’s white-hot Avengers television spinoff, Marvel’s S.H.I.E.L.D., make it to the airwaves? Will NBC take a chance on J.J. Abrams’ supernatural drama Believe, which revolves around a girl with unique abilities and the man who is assigned to protect her at all costs? Or will it be yet another year of doctors, lawyers, and cops?

Below you’ll find a guide to the week’s schedule of upfront presentations:

In the meantime, here’s a scorecard—broken down by network—to help you keep track of which of the 100-plus network pilots have been picked up to series, which current shows will be returning next season, and which shows are now six feet under. (As renewals and cancelations come in, we will continue to update this list throughout the week or so.)