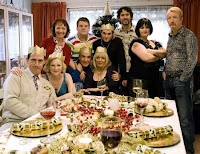 Just in time for the holidays, BBC America has announced that it has acquired the US rights to the Gavin & Stacey Christmas special (which aired in the UK last year) and Season Three of Gavin & Stacey.

(Yes, this news makes me as giddy as a small child opening presents on Christmas Day.)

Meanwhile, the digital cabler has also announced that Season Three of Gavin & Stacey will be crossing the pond. BBC America will launch the comedy's third and final season in second quarter 2010. Exact airdate will be announced at a later date.

The full press release from BBC America can be found below.

GAVIN & STACEY CHRISTMAS SPECIAL - U.S. PREMIERE
Last season ended with Gavin and Stacey reuniting after a difficult separation and happily celebrating the birth of Smithy and Nessa’s baby. Now it's Christmas Eve and Stacey’s family decide to join Gavin’s for one of his dad’s famous turkey dinners. Chaos erupts - obviously. Smithy, excited about his first Christmas with his son, doesn’t count on Nessa’s boyfriend Dave Coaches (Steffan Rhodri) tagging along and hilarity ensues throughout the day as Smithy’s jealousy builds. The neighbors Pete (Adrian Scarborough) and Dawn (Julia Davies) get embroiled in a family argument and it ends with Pete punching Dave Coaches. Meanwhile Stacey's older brother, Jason (Robert Wilfort) and Uncle Bryn (Rob Brydon), have a heart-to-heart about “that” mysterious fishing trip from season one while Gavin and Stacey’s reveal their plan to move to Barry Island which doesn’t quite turn out to be the Christmas present their families were expecting.

GAVIN & STACEY - SEASON 3 - U.S. PREMIERE
As Gavin starts his new job, the move to Barry Island means big changes for the whole family. Gavin’s parents, Pam and Mick have to adjust to an empty nest while Stacey’s mom, Gwen's got a full house again. Stacey’s in her element, but will this finally be the solution to the couple's long-distance problem? And how will Gavin take to living in Wales?

Bella Spruce said…
The Gavin & Stacey Christmas Special is hilarious and beautifully bittersweet. I'm thrilled the hear that they will FINALLY be airing it here after too long a wait.
12/09/2009

Hadley said…
It's a Christmas miracle! I've been waiting and waiting to see the Christmas special and am so happy that I'll finally have a chance. And I'm really looking forward to season three too!
12/09/2009