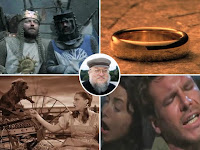 Game of Thrones, HBO's adaptation of George R.R. Martin's first book in his bestselling series A Song of Ice and Fire, premieres April 17th on HBO.

In anticipation, Martin curates his 10 favorite fantasy films of all time, from Ladyhawke and Raiders of the Lost Arc to the Lord of the Rings trilogy at The Daily Beast.

For Martin's previous Curator feature of his favorite science-fiction films, read this. For my interview with Martin; the show's creators, David Benioff and D.B. Weiss; and Sue Naegle, the entertainment president of HBO, read this feature. Fans of the books should also read "10 Secrets of HBO's Game of Thrones," to find out about casting direwolves, forging the Iron Throne, creating the Dothraki language, and many other behind-the-scenes details. And you can read my review of the first six episodes of Game of Thrones here. (Minor spoilers, only.)

Did your favorite make the list? What's your take on GRRM's favorite science fiction films? Head to the comments section to discuss and debate.