The Skull Beneath the Skin: An Advance Review of the First Three Episodes of AMC's The Killing 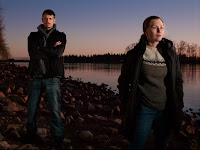 Of John Webster (who wrote "The Duchess of Malta"), poet T.S. Eliot said that he was "much possessed by death" and "saw the skull beneath the skin."

Eliot's quotation would equally apply to the writing team--overseen by executive producer Veena Sud (Cold Case)--of AMC's newest drama, taut and suspenseful murder mystery The Killing (based on hit Danish drama Forbrydelsen, or "The Crime"), which launches this Sunday. In exploring the disappearance (and, yes, death) of a Seattle teenager, the detectives in this slow-burn but addictive series are themselves seeing what lies beneath the surface of the seemingly placid individuals they encounter in the course of their investigation.

"Who Killed Rosie Larsen?" is the question hovering over the action here, but it's matters of mortality that link each of the characters in this whip-smart and absorbing drama. While this is first and foremost a whodunit, what's being dramatized here isn't just the murder investigation, but the emotional impact of a young girl's death and the ways in which murder--more than any crime--rip away any semblance of privacy from the victims and those around them.

That includes the dead girl herself, a Laura Palmer-esque teenager concealing a secret life from her family, and her parents, loving-but-brittle mother Mitch Larsen (Michelle Forbes) and gruff Stanley (Brent Sexton). The two took their sons camping for the weekend, leaving Rosie on her own and never thought twice about the fact that they didn't hear from her all weekend long. An oversight? A damning mistake that will remain with them for the rest of their lives?

Detective Sarah Linden (Big Love's always phenomenal Mireille Enos) is herself haunted by the case, which she lands just as she's got one foot out the door. Linden is meant to be trading the rainy gloom of Seattle (itself a co-star in the show) for Sonoma, moving her young son and planning a wedding in three weeks to her fiancee Rick (Callum Keith Rennie of Battlestar Galactica). No other actress does haunted quite like Enos, whose wounded baby doll face conceals all manner of secrets of her own. Does she want to leave her job? Does she love Rick? In staying on to solve this murder is she trading personal happiness for professional duty?

It's clear that Sarah has a emotional connection to Rosie Larsen; witness the way she sadly surveys the detritus Rosie leaves behind in her wake, the little girl's room with its butterfly motif on the way, emblems in their own way of a short life lived. But is Sarah forging ahead with the investigation because she can't let go of the dead girl... or of her own life in Seattle? Does she feel something deeper for the victim here than she does for the living, breathing man who intends to marry her?

Linden is saddled with a new partner working his first murder investigation, ex-narcotics squad member Stephen Holder (Joel Kinnaman), whose methodologies couldn't be more removed from Sarah's by-the-book mentality. Holder's a slick grifter when it comes to the lowlifes, sexed-up teens, and druggies that they encounter in the process of their inquiries, but he's got no sense of compassion or subtlety when it comes to questioning those who might be at all prickly about his bluntness. But where Linden manages to put people at ease, Holden thrives at knocking people off-balance. And he has no qualms about bending the law to do so, engaging in some shady tactics that do pay off in their own way.

Across town, while Rosie's family awaits word of their daughter's fate and Linden and Holden uncover clues to Rosie's disappearance, Darren Richmond (Billy Campbell) pursues his mayoral campaign while several skeletons knock together in his closet. There's a dead wife, the nature of her demise tantalizingly unclear, and there's a unexpected connection between his campaign and Rosie's death, as well as rumblings that someone close to him is leaking information to the press and possibly the incumbent mayor as well.

But Richmond has surrounded himself by those he trusts: Jamie Dempsey (Mad Men's Eric Ladin), a consummate strategist and campaign golden boy, and Gwen Eaton (Drive's Kristin Lehman), Darren's well-heeled campaign adviser and lover. Did one of them betray him? And just how far are they willing to go in order to sabotage his campaign? Or is Darren Richmond, white knight politician, not as squeaky-clean as he appears? Do we relish seeing a good man pulled down off of his pedestal... or is someone looking to drag him through the muck?

These are just some of the questions that swirl around the characters in the initial installments, which depict the early stages of the investigation as Linden and Holden begin to mine Rosie's life for possible suspects and spread their inquires further afield. The show creates several overlapping, concentric spheres of society around which the action moves; one could draw a Venn diagram depicting these areas of inquiry: the domestic sphere of Rosie's family; the teen demi-monde of high school; the political campaign; the police. Throughout the series, I'm expecting that we see these spheres overlap in new and unexpected ways as the detectives uncover just what happened to Rosie.

It's impossible not to get caught up in the action of these early episodes, each clue that Linden and Holden uncover explodes a new series of questions. A devil's mask becomes a crucial piece of evidence, a home-made video, a hole in the wall; each clue is just another link in a never-ending chain, twisting its way around the lives of these individuals. Their lives, all of them, have become about death in their own ways.

Enos' performance is a standout as she grapples with the investigation and the internal tug-of-war happening within her heart. As incandescent as ever, she has an easy femininity to her, a rare vulnerability that's at odds with her profession. Is she good at her job because she cares too much? Campbell manages to be magnetic and sympathetic, while also tugging the rug out from underneath us. Is he a good man? Ladin and Lehman sparkle in their unspoken rivalry and the eternal game of one-up-manship taking place between them. ("The knives of jealousy," wrote crime novelist Ruth Rendell, "are honed on details.")

But the moment that gets me every time is when Forbes' Mitch learns the fate of daughter Rosie over the telephone. Her breakdown, on the floor of the kitchen, listening to a scene unfold but being unable to see it with her own eyes is the stuff of legend, recalling a similar moment in the pilot of Twin Peaks, where Grace Zabriskie's Sarah Palmer has to listen to Sheriff Truman (Michael Ontkean) tell her husband (Ray Wise) that the body of their daughter has been discovered. Gut-wrenching in its emotional truth, it's an explosive scene whose shrapnel is keenly felt, her mother's cry of loss and grief becoming an overwhelming keening.

We see firsthand the damage done to Rosie, to her family, and to everyone around her. The fear, the humiliation, the grief, the rage, the unbearable weight of it is depicted in a sensitive and intelligent fashion. But the mystery of who did this to her, of what drives people to kill, gives this drama a sharp undercurrent, a nerve-jangling tension that drives the plot of The Killing forward.

Ultimately, The Killing is a rare beast: spellbinding, introspective, and addictive, all at once. It should not, for any reason, be missed.

The Killing premieres Sunday evening at 9 pm ET/PT (with a special two-hour debut) on AMC.

George Matusek said…
It sounds as if this will be a welcome alternative to unrealistic crime shows like CSI with crime labs stuffed with $900,000,000 worth of high-tech equipment operated by robotic technicians lacking in human personalities.
4/01/2011

AskRachel said…
Really enjoyed this...especially the second half. And the cast is fantastic. (I love Mireille Enos!) I'm definitely hooked.
4/04/2011