The Daily Beast: "Sweet Genius: Ron Ben-Israel is the Scariest Man on Television" 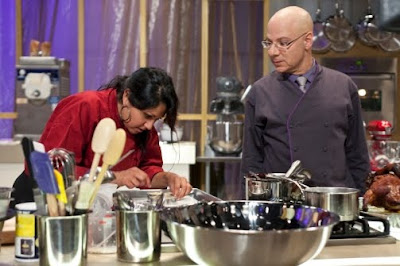 Ron Ben-Israel may be a renowned pastry chef in real life, but as the host of Food Network’s cooking show Sweet Genius, he terrifies me.

At The Daily Beast, you can read my latest feature, "The Creepiest Man on Television," in which I discuss just why Ben-Israel freaks me out and review his Food Network show, Sweet Genius, a bizarre and often head-scratching mishmash of styles, tones, and freaky weirdness.

The scariest man on television is obsessed with cakes.

Ron Ben-Israel, the host of Food Network’s bizarre culinary competition series Sweet Genius, absolutely terrifies me. Watching the show reduces me to cold sweat, imagining that Ben-Israel has forced me into the Saw-like confines of the Sweet Genius set, where I must bake a génoise while he cackles eagerly at my misery before murdering me.

Sweet Genius is a variation on the network’s highly successful Chopped: Four chefs—pastry chefs and confectionary makers in this case—must cook three courses from pre-selected mystery ingredients, and one chef gets eliminated each round, leading to a final showdown between the last two competitors. This is hardly a novel conceit (in fact the entire show seems to be a direct reaction to Bravo’s Top Chef: Just Desserts), but here the courses—or “tests” to borrow the Sweet Genius parlance—are composed of chocolate, candy, and cake rounds, and the judge may cause you to wet your pants in fright, even if you’re not appearing on the show.

Overseeing the action from a thronelike place of power on a raised dais, Ben-Israel seems to be a cross between Fringe’s Observers—chromelike baldpates whose alienlike eyes skim over the action but never quite connect with it—and Austin Powers’s Bond-villain spoof Dr. Evil, given their similar physical appearances, fondness for wearing purple-blue and self-serious natures.

It’s the last element that’s the most troubling. While there’s clearly an overt aura of enforced theatricality to the proceedings, Ben-Israel takes his persona a little too far. There’s the spine-chilling way in which he tastes elements of the contestants’ dishes with an insane amount of fastidiousness, as though he were solving a complex differential equation or dissecting a victim rather than, well, eating candy. Adding to this sense of unease is the way with which Ben-Israel speaks, an exaggerated blend of winking coyness and thunderous voice of evil, announcing the inspiration for the dish (Ballerinas! Live baby chicks! A ventriloquist dummy!) and the way in which he slams his hand down on the large, overtly cake-shaped button that controls the show’s conveyer belt.

Anonymous said…
I see a lot of food network programs. Specially I like the competitions. Yesterday I watched two of the sweet genius. The judge I felt was biased. I would like some one neutral in the judging panel. I never felt like this in any other programs of FN.
11/16/2012